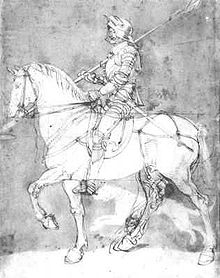 It is generally believed that the portrayal is a literal, though pointed, celebration of the knight’s Christian faith, and also of the ideals of humanism. An alternative interpretation was presented in 1970 by writer Sten Karling, and later by Ursula Meyer, who suggested that the work did not seek to glorify the knight, but instead depicts a “robber knight” (raubritter). They point to the lack of Christian or religious symbolism in the work and to the fox’s tail wrapped on top the knight’s lance – in Greek legend [16] the fox’s tail was a symbol of greed, cunning and treachery, as well as lust and whoring. [11] However, knights were commonly depicted in contemporary art with a fox tail tied to the tip of their lance. Moreover, the fox tail was a common form of protective amulet. [17] in this interpretation Death and the Devil are merely the knight’s companions on his journey, not omens. [18]
Most print rooms with a significant collection will have a copy, and there are many, often late and worn, impressions in private collections. 2. Boon, Karel G. & Robert W. Scheller. The Graphic Art of Albrecht Dürer, Hans Dürer, and The Dürer School, Amsterdam, 1971. Listed and illustrated as cat. no. 74 on pg. 68-9.
According to Weber, this print was particularly inspired by a piece of literature by Dutch writer, Erasmus who published several Christian-inspired works during the early 16th century. Shedding some light onto its symbolism and meaning, the book, titled Enchiridion militis christiani states of the Knight, Death, & Devil:
So that you may not stray from the road of virtue, because it is rough and sad, and because the comforts of this world and the temptations of this world, the flesh and the devil must be overcome, remember this third rule: Pay no attention to the apparitions of terror and phantasy which may confront you at the gate of Hell, as did Aeneas. If you look upon these empty shadows with disdain and remain on the straight and narrow path with zeal and with care, you will overcome all evil.

In 1933, the National Socialists held their fifth party congress in Nuremberg. It was dubbed the Reichsparteitag des Sieges, or victory rally, to celebrate the Nazi takeover of the German government.
Chock-full of symbols — from the skull, dog and salamander along the bottom edge to the distant castle towers grazing the top — the picture sets its action in a compressed space barely the width of the Knight’s horse. With his diagonally oriented lance cropped at both ends, the Knight seems wedged, almost entombed, inside the borders of the print, as his two unwelcome visitors, Death and the Devil, encroach upon him from the jagged shadows of the shallow space behind. 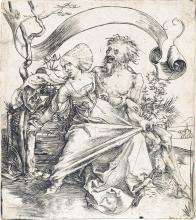