aravaggio. the calling of st. matthew

The oil painting was commissioned for the Contarelli Chapel in the church of San Luigi dei Francesi in Rome, where it has been proudly exhibited since its completion, probably in 1599 and 1600.
If you look closely, you’ll notice that while Jesus’s torso and head are pointed in toward the room, his feet point right, toward the suggested door. Jesus is not waiting for Matthew. The man has been chosen, and the position of Christ’s feet show it’s time to go.

On close inspection, the power of this silent but dramatic narrative lies in its capture of the exact split-second when Christ’s summons hangs in the air, when his listeners are still shocked and when Levi himself is caught in suspended indecision. In another second, he will rise up, become Matthew the apostle and follow Christ out of the room. But Caravaggio’s masterpiece is no film, and Levi’s moment of uncertainty – juxtaposed with the monumental certainty of Jesus Christ – will last for ever.
The Calling of Saint Matthew was painted for the Contarelli Chapel in the church of San Luigi dei Francesi in Rome, where it remains to this day. It hangs alongside two sister paintings, also by Caravaggio: The Martyrdom of Saint Matthew and The Inspiration of Saint Matthew. The Calling and the Martyrdom were completed in 1600; the Inspiration not until 1602.

The Calling hangs opposite The Martyrdom of Saint Matthew. While the Martyrdom was probably the first to be started, the Calling was, by report, the first to be completed. The commission for these two lateral paintings — the Calling and the Martyrdom — is dated July 1599, and final payment was made in July 1600. Between the two, at the altar, is The Inspiration of Saint Matthew (1602).
Some scholars speculate that Jesus is portrayed as the Last Adam or Second Adam as titled in the New Testament. This is displayed in Christ’s hand as it reaches out towards Matthew. It is almost a mirrored image of Adam’s hand in The Creation of Adam by Michelangelo, the namesake of Caravaggio. [2] Twice in the New Testament, an explicit comparison is made between Jesus and Adam. In Romans 5:12–21, Paul argues that “just as through the disobedience of the one man the many were made sinners, so also through the obedience of the one man the many will be made righteous” (Romans 5:19, NIV). In 1 Corinthians 15:22, Paul argues that “as in Adam all die, so in Christ, all will be made alive,” while in verse 45 he calls Jesus the “last/ultimate/final Adam”. [3] [ circular reference ]

Caravaggio represented the event as a nearly silent, dramatic narrative. The sequence of actions before and after this moment can be easily and convincingly re-created. The tax-gatherer Levi (Saint Matthew’s name before he became the apostle) was seated at a table with his four assistants, counting the day’s proceeds, the group lighted from a source at the upper right of the painting. Christ, His eyes veiled, with His halo the only hint of divinity, enters with Saint Peter. A gesture of His right hand, all the more powerful and compelling because of its languor, summons Levi. Surprised by the intrusion and perhaps dazzled by the sudden light from the just-opened door, Levi draws back and gestures toward himself with his left hand as if to say, “Who, me?”, his right hand remaining on the coin he had been counting before Christ’s entrance.
The two figures on the left, derived from a 1545 Hans Holbein print representing gamblers unaware of the appearance of Death, are so concerned with counting the money that they do not even notice Christ’s arrival; symbolically their inattention to Christ deprives them of the opportunity He offers for eternal life, and condemns them to death. The two boys in the center do respond, the younger one drawing back against Levi as if seeking his protection, the swaggering older one, who is armed, leaning forward a little menacingly. Saint Peter gestures firmly with his hand to calm his potential resistance. The dramatic point of the picture is that for this moment, no one does anything. Christ’s appearance is so unexpected and His gesture so commanding as to suspend action for a shocked instant, before reaction can take place. In another second, Levi will rise up and follow Christ – in fact, Christ’s feet are already turned as if to leave the room. The particular power of the picture is in this cessation of action. It utilizes the fundamentally static medium of painting to convey characteristic human indecision after a challenge or command and before reaction. 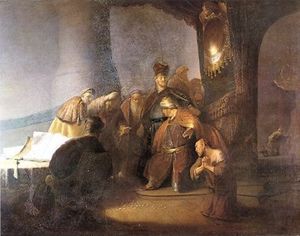 Bernard Berenson agreed: “With the exception of Michelangelo, no other Italian painter exercised so great an influence”.
Composition:
The Calling of Saint Matthew can be divided into two parts. The figures on the right form a vertical rectangle while those on the left create a horizontal block. The two sides are further distinguished by their clothing and symbolically, by Christ’s hand.