By the time Medici was Exiled, Donatello stayed in Rome until 1433. His two artworks in the city was the Giovanni Crivelli’s Tomb located in Santa Maria, a province of Aracoeli. And his other work was the Saint Peter’s Basilica Ciborium. By the time he returned to Florence, he voluntarily commissioned for the construction of the marble pulpit of the façade of the Cathedral Prato, which was the considered the lase project with Michelozzo.
Following the Duomo, he then joined hands with Michelozzo in the making of Antipope John XXIII’s Funerary Monument in Florence. He also accomplished the marble relief of the late Cardinal Rainaldo Brancacci’s funerary monument at Sant’Angelo ‘A Nilo, Pisa by 1427.

Donatello had nurtured a close and lucrative relationship with Cosimo de’ Medici in Florence. In 1430, the eminent art patron commissioned Donatello to do another statue of David, this time in bronze. This is probably Donatello’s most famous work. The sculpture is fully independent from any architectural surroundings that might support it. Standing a little over five feet tall, David represents an allegory of civic virtue triumphing over brutality and irrationality.
There are accounts by some historians that Donatello and Brunelleschi struck up a friendship around 1407 and traveled to Rome to study classical art. Details of the trip are not well known, but it is believed that the two artists gained valuable knowledge excavating the ruins of classical Rome. The experience gave Donatello a deep understanding of ornamentation and classic forms, important knowledge that would eventually change the face of 15th-century Italian art. His association with Brunelleschi likely influenced him in the Gothic style that can be seen in much of Donatello’s early work.

A good deal is known about Donatello’s life and career, but little is known about his character and personality, and what is known is not wholly reliable. He never married and he seems to have been a man of simple tastes. Patrons often found him hard to deal with in a day when artists’ working conditions were regulated by guild rules. Donatello seemingly demanded a measure of artistic freedom. Although he knew a number of humanists well, the artist was not a cultured intellectual. His humanist friends attest that he was a connoisseur of ancient art. The inscriptions and signatures on his works are among the earliest examples of the revival of Classical Roman lettering. He had a more detailed and wide-ranging knowledge of ancient sculpture than any other artist of his day. His work was inspired by ancient visual examples, which he often daringly transformed. Though he was traditionally viewed as essentially a realist, later research indicates he was much more.
Donatello was one of greatest Italian Renaissance artists, noted especially for his sculptures in marble, bronze, and wood. His sculpted figures were some of the first since antiquity to represent anatomy correctly—though some late works were slightly exaggerated—and to suggest a sense of individuality. 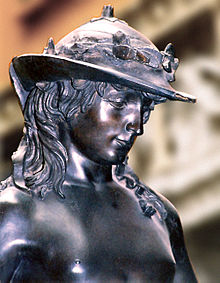 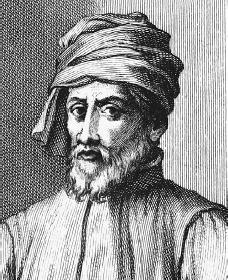 Much of Donatello’s later work demonstrates his understanding of classical art. For example, the bronze David in the Bargello is a young boy clothed only in boots and a pointed hat. This enigmatic figure is in all probability the earliest existing freestanding nude since antiquity (ancient times).
Donato di Niccolò Bardi, called Donatello, was born in 1386 in Florence, Italy. Little is known about his life, although many short stories about his life are recorded by Giorgio Vasari in his Lives of the Artists (1550). In Florence Donatello learned the basics of sculpting at the Stonemasons’ Guild, where he learned other crafts as well. Donatello then became an apprentice (a person who works to learn a trade) to Lorenzo Ghiberti (c. 1378–1455). In 1403, at the age of seventeen, Donatello was working for the master on the bronze reliefs (sculpting from a flat surface) of the doors of the Florentine Baptistery. By 1407 he had left Ghiberti for the workshops of the Cathedral in Florence.