Cornaro had chosen the hitherto unremarkable church of the Discalced Carmelites for his burial chapel. [a] The selected site for the chapel was the left transept that had previously held an image of ‘St. Paul in Ecstasy’, which was replaced by Bernini’s dramatization of a religious experience undergone and related by the first Discalced Carmelite saint, who had been canonised not long before, in 1622. [1] It was completed in 1652 for the then princely sum of 12,000 scudi. [b]
The group is illuminated by natural light which filters through a hidden window in the dome of the surrounding aedicule, and underscored by gilded stucco rays. Teresa is shown lying on a cloud indicating that this is intended to be a divine apparition we are witnessing. Other witnesses appear on the side walls; life-size high-relief donor portraits of male members of the Cornaro family, e.g. Cardinal Federico Cornaro and Doge Giovanni I Cornaro, are present and shown discussing the event in boxes as if at the theatre. Although the figures are executed in white marble, the aedicule, wall panels and theatre boxes are made from coloured marbles. Above, the vault of the Chapel is frescoed with an illusionistic cherub-filled sky with the descending light of the Holy Ghost allegorized as a dove.

 Francois Duquesnoy (1594-1643)
Exponent of a restrained form of classical sculpture.
After Innocent X

Saint Teresa describes her intensely spiritual experience in very physical, even sexual terms. Why? We know that an important goal of Baroque art is to involve the viewer. Teresa is describing this in physical terms so that we can understand. After all, being visited by an angel and filled with the love of God is no small experience. How can we, with our ordinary experiences, hope to understand the intensity and passion of her experience except on our own terms?
When we walk toward the chapel (figure 2) we see that on either side of us, on the side walls, there are what look like theater boxes. In these boxes, seated figures in appear to be talking and gesturing to each other. Perhaps they are kneeling in prayer as they watch and discuss the scene of the Ecstasy of Saint Teresa. 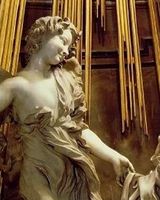 The Ecstasy of St. Theresa is not just a sculpture, but a total environment: Bernini designed the entire chapel, creating a veritable stage set complete with sculpted audience members.
St. Theresa of Avila

Gian Lorenzo Bernini, Ecstasy of Saint Teresa, 1647-52 (Cornaro Chapel, Santa Maria della Vittoria, Rome). Speakers: Dr. Beth Harris and Dr. Steven Zucker
This is Saint Teresa’s description of the event that Bernini depicts: “Beside me, on the left, appeared an angel in bodily form. He was not tall but short, and very beautiful; and his face was so aflame that he appeared to be one of the highest rank of angels, who seem to be all on fire. In his hands I saw a great golden spear, and at the iron tip there appeared to be a point of fire. This he plunged into my heart several times so that it penetrated to my entrails. When he pulled it out I felt that he took them with it, and left me utterly consumed by the great love of God. The pain was so severe that it made me utter several moans. The sweetness caused by this intense pain is so extreme that one cannot possibly wish it to cease, nor is one’s soul content with anything but God. This is not a physical but a spiritual pain, though the body has some share in it—even a considerable share.”