There is some debate over which man in the picture is Saint Matthew, as the surprised gesture of the bearded man at the table can be read in two ways.
There are many other early modern representations of the calling of Matthew. Two were painted prior to Caravaggio’s but it is unlikely that Caravaggio would have encountered them. [ citation needed ]

“The Calling of Saint Matthew” is an oil painting on canvas completed by Caravaggio around 1599. The painting was Caravaggio’s first public commission in Rome, requested by the San Luigi dei Francesi church. It was one of a group of three paintings commissioned for Cardinal Matteo Contarelli’s chapel. The painting depicts an episode of the Gospels in which Matthew, a greedy tax collector, abandons his job to follow Jesus. The scene takes place in a small and dark room. Feeble light filters in through a small window. Matthew is seated at a table, counting money together with four other tax collectors. They are all dressed in modern clothes, those worn in Caravaggio’s day. It was one of the first times a sacred event was set in the present and painted with extreme realism. Two figures – Christ and Saint Peter – enter the scene from the right. They bring with them a ray of light that strikes the men’s faces, hands, and parts of their clothing, while the rest of the scene is immersed in darkness. Jesus points a theatrically extended finger at Matthew, who, in turn, points to himself in amazement, stunned that he has been chosen.
The two younger tax collectors turn to look at Christ, but the importance of the event is lost on them. The others continue to count their coins without so much as looking up. “The Calling of Saint Matthew” marks a turning point in the way Caravaggio used light in his paintings. His previous paintings were “illuminated,” with images that stood out clearly against their backgrounds. There was no contrast, and light was generally diffuse. From this moment on, light in the scenes he painted assumed an active role, penetrating darkness from different angles with violent and dramatic intensity. In “The Calling of Saint Matthew,” light is a symbol of the Divine Grace bestowed on all men. But only Matthew responds to Jesus’ call. It is a pictorial representation of the concept of free will: every man is free to choose whether or not to follow the path to salvation. The painting was first restored in 1939, and again in 1965. X-ray analysis conducted during the restoration found that the figure of Saint Peter was added at a later stage, probably to include a direct reference to the Church as mediator between God and man. The “The Calling of Saint Matthew” is still located in the Contarelli chapel in Rome’s San Luigi dei Francesi church. 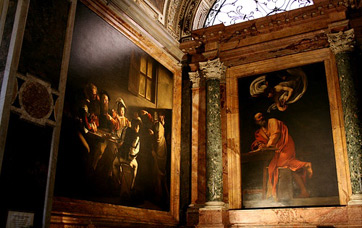 The Calling of Saint Matthew depicts the moment from Matthew 9:9 when Jesus passes by Matthew, a tax collector, and says ‘Follow me.’ Matthew (also called Levi) did so and became one of Jesus’ twelve disciples. When the religious authorities chastised Jesus for keeping company with tax collectors, he explained that he was there to save sinners, not the righteous. While the story might seem simple, it indicated that even those who were considered to be the worst of people could be saved and were welcome to follow Jesus.
This was Caravaggio’s first public project and if he failed, his fledgling career might never take off. He had never before painted on such a grand scale; his repertoire until this point had been limited to paintings for private devotion, scenes of everyday life, and allegories celebrating love and music. Thus, the artist needed to present The Calling of Saint Matthew in a memorable way.

The figures that appear in The Calling of Saint Matthew are similar if not modeled by those persons in other works, such as Cardshaps. It seems that this painting posed problems for Caravaggio in terms of its size and thus he used this piece to come up with a solution for painting from life grand, complicated multi-figured compositions.
This work was so different from Mannerist paintings of the time and this added to its popularity. The Calling of Saint Matthew was particularly appropriate to both the place and the time, given Henry IV, heir to St Louis, had recently converted to the faith of his ancestors.