Explanation of Other Paintings by Caravaggio
In keeping with his plain, unvarnished aesthetics, Caravaggio borrows from his earlier genre painting (The Cardsharps, The Fortune-Teller), and sets the scene in what appears to be a tavern, rather than a counting house or office. He may have modelled it on earlier examples of Northern Renaissance art – by Hans Holbein and others – featuring money lenders seated around a table. In addition, he introduces some very human interplay into the situation. To begin with, when he sees Christ pointing at him, Levi responds with a gesture, as if to say “Me?” indicating his uncertainty whether he is being addressed, or the younger man slumped on his right. In addition, the ray of light illuminating their faces, draws attention to the two youths, who appear rather lost in this group of older men. While one of them draws back in apprehension and looks to his older neighbour for protection, the other has turned to confront Christ, causing Saint Peter to gesture firmly for calm. Through the visual contrast between their reactions, Caravaggio displays psychological insight into two possible patterns of human behaviour in the same situation.

The Calling of Saint Matthew is a masterpiece by Michelangelo Merisi da Caravaggio, depicting the moment at which Jesus Christ inspires Matthew to follow him. It was completed in 1599–1600 for the Contarelli Chapel in the church of the French congregation, San Luigi dei Francesi in Rome, where it remains. It hangs alongside two other paintings of Matthew by Caravaggio, The Martyrdom of Saint Matthew (painted around the same time as the Calling) and The Inspiration of Saint Matthew (1602).
In some ways, most of the plebeian, nearly life-sized inhabitants of Levi’s money table are the equivalent, if not modeled by those persons in other Caravaggio paintings, including Caravaggio’s famous secular genre paintings of The Cardsharps (1595).

The two figures on the left, derived from a 1545 Hans Holbein print representing gamblers unaware of the appearance of Death, are so concerned with counting the money that they do not even notice Christ’s arrival; symbolically their inattention to Christ deprives them of the opportunity He offers for eternal life, and condemns them to death. The two boys in the center do respond, the younger one drawing back against Levi as if seeking his protection, the swaggering older one, who is armed, leaning forward a little menacingly. Saint Peter gestures firmly with his hand to calm his potential resistance. The dramatic point of the picture is that for this moment, no one does anything. Christ’s appearance is so unexpected and His gesture so commanding as to suspend action for a shocked instant, before reaction can take place. In another second, Levi will rise up and follow Christ – in fact, Christ’s feet are already turned as if to leave the room. The particular power of the picture is in this cessation of action. It utilizes the fundamentally static medium of painting to convey characteristic human indecision after a challenge or command and before reaction.
The subject traditionally was represented either indoors or out; sometimes Saint Matthew is shown inside a building, with Christ outside (following the Biblical text) summoning him through a window. Both before and after Caravaggio the subject was often used as a pretext for anecdotal genre paintings. Caravaggio may well have been familiar with earlier Netherlandish paintings of money lenders or of gamblers seated around a table like Saint Matthew and his associates.

In 1599, Caravaggio received a commission to paint the lateral walls of the Contarelli Chapel in San Luigi dei Francesci, France’s national church in Rome. The decoration of the Contarelli Chapel was funded by an endowment from the French cardinal Matthieu Cointerel (‘Contarelli’ in Italian) upon his death in 1585. Contarelli stipulated that his chapel should be adorned with scenes from the life of Saint Matthew, his namesake. The subject of Matthew’s calling was chosen for the left wall of the chapel and Matthew’s martyrdom was chosen for the chapel’s right wall.
The Italian Baroque painter Michelangelo Merisi da Caravaggio (1571-1610) is renowned today for creating a moralizing, and at times controversial, body of work. In this text lesson, we will dissect the meaning behind The Calling of Saint Matthew, the life-size oil painting that launched Caravaggio’s career and made him the most desired religious painter in Rome. 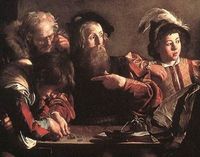 Additionally, in this work there is a likeness between the gesture of Jesus as pointing towards Matthew and that of God as he awakens Adam in Michelangelo’s Sistine Chapel.
Caravaggio played a key role in defining 17th century Italian art. In the 20th century when emerging artists were adopting his techniques and imitating his style. Caravaggism had profound effects on the art world and artists that were directly and indirectly influenced by Caravaggio include Rubens, Hals, Rembrandt, Vermeer, Velazquez and Bernini.