For an explanation of other important pictures from the Baroque era, see: Famous Paintings Analyzed (1250-1800).

In keeping with his plain, unvarnished aesthetics, Caravaggio borrows from his earlier genre painting (The Cardsharps, The Fortune-Teller), and sets the scene in what appears to be a tavern, rather than a counting house or office. He may have modelled it on earlier examples of Northern Renaissance art – by Hans Holbein and others – featuring money lenders seated around a table. In addition, he introduces some very human interplay into the situation. To begin with, when he sees Christ pointing at him, Levi responds with a gesture, as if to say “Me?” indicating his uncertainty whether he is being addressed, or the younger man slumped on his right. In addition, the ray of light illuminating their faces, draws attention to the two youths, who appear rather lost in this group of older men. While one of them draws back in apprehension and looks to his older neighbour for protection, the other has turned to confront Christ, causing Saint Peter to gesture firmly for calm. Through the visual contrast between their reactions, Caravaggio displays psychological insight into two possible patterns of human behaviour in the same situation.

In some ways, most of the plebeian, nearly life-sized inhabitants of Levi’s money table are the equivalent, if not modeled by those persons in other Caravaggio paintings, including Caravaggio’s famous secular genre paintings of The Cardsharps (1595).
The painting depicts the story from the Gospel of Matthew (Matthew 9:9): “Jesus saw a man named Matthew at his seat in the custom house, and said to him, “Follow me”, and Matthew rose and followed Him.” Caravaggio depicts Matthew the tax collector sitting at a table with four other men. Jesus Christ and Saint Peter have entered the room, and Jesus is pointing at Matthew. A beam of light illuminates the faces of the men at the table who are looking at Jesus Christ.

The Calling of Saint Matthew, a painting that took time to be accepted due the character and history of Caravaggio, is the finest depiction of the humanity of Christ. It depicts the miracle of Jesus Christ, (accompanied by Peter) designating Matthew to follow him. However, notice how unspectacular this scene appears to be despite its depiction of such a spectacular event. It is as if the populace of the tavern is not aware of the events happening around them! A man is far to busy counting his day’s pay closely surveyed by an elder above his shoulder. Moreover, both children simply turn as Jesus and Peter enter but only spare a slight grin. The only characters aware of the event happening are, as we can see by their focused stare into each other’s eyes, Christ and Matthew. It is as if the people of this scene are unaware that the Messiah had just entered.
However, one must remember that in reality, this is probably how the miracle occurred… Jesus was not accompanied by a marching band of whistles and trumpets. Therefore, through this painting, Caravaggio let’s us comprehend the true reality of the miraculous – that it may escape one’s notice. Indeed, many people do not actually know which character represents Christ in the painting. Just as the children in the painting hide Matthew, so Peter hides Jesus. Moreover, it is not Jesus but Matthew upon whom the light shines and defines; a light which in the painting appears out of nowhere. But do take a moment to admire the beauty, sacrality and to a certain extent the humanity of Christ’s face.

The subject traditionally was represented either indoors or out; sometimes Saint Matthew is shown inside a building, with Christ outside (following the Biblical text) summoning him through a window. Both before and after Caravaggio the subject was often used as a pretext for anecdotal genre paintings. Caravaggio may well have been familiar with earlier Netherlandish paintings of money lenders or of gamblers seated around a table like Saint Matthew and his associates.
Caravaggio represented the event as a nearly silent, dramatic narrative. The sequence of actions before and after this moment can be easily and convincingly re-created. The tax-gatherer Levi (Saint Matthew’s name before he became the apostle) was seated at a table with his four assistants, counting the day’s proceeds, the group lighted from a source at the upper right of the painting. Christ, His eyes veiled, with His halo the only hint of divinity, enters with Saint Peter. A gesture of His right hand, all the more powerful and compelling because of its languor, summons Levi. Surprised by the intrusion and perhaps dazzled by the sudden light from the just-opened door, Levi draws back and gestures toward himself with his left hand as if to say, “Who, me?”, his right hand remaining on the coin he had been counting before Christ’s entrance. 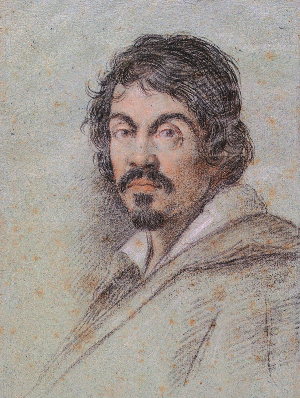 The Italian Baroque painter Michelangelo Merisi da Caravaggio (1571-1610) is renowned today for creating a moralizing, and at times controversial, body of work. In this text lesson, we will dissect the meaning behind The Calling of Saint Matthew, the life-size oil painting that launched Caravaggio’s career and made him the most desired religious painter in Rome.
Want to watch this again later?