Some scholars speculate that Jesus is portrayed as the Last Adam or Second Adam as titled in the New Testament. This is displayed in Christ’s hand as it reaches out towards Matthew. It is almost a mirrored image of Adam’s hand in The Creation of Adam by Michelangelo, the namesake of Caravaggio. [2] Twice in the New Testament, an explicit comparison is made between Jesus and Adam. In Romans 5:12–21, Paul argues that “just as through the disobedience of the one man the many were made sinners, so also through the obedience of the one man the many will be made righteous” (Romans 5:19, NIV). In 1 Corinthians 15:22, Paul argues that “as in Adam all die, so in Christ, all will be made alive,” while in verse 45 he calls Jesus the “last/ultimate/final Adam”. [3] [ circular reference ]
Pope Francis has said that he often went to San Luigi as a young man to contemplate the painting. Referring both to Christ’s outstretched arm and Matthew’s response, Francis said, “This is me, a sinner on whom the Lord has turned his gaze.” [4]

Caravaggio originally showed Goliath’s face fixed in wild-eyed open-mouthed terror, tongue rolling, eyeballs swivelled to the edges of the sockets[citation needed. In the finished painting the melodrama is banished: the drama is transferred from Goliath to the quietly efficient David, his face almost hidden, intent on the work of his hands in his enemy’s hair, kneeling almost casually on the man’s torso. This painting and two others done at about the same time – the first version of Sacrifice of Isaac and the first John the Baptist – were taken to Spain shortly after they were made, where they were frequently copied and made a deep impression on art in that country.
The first version revealed by the x-rays is in the Mannerist style of the most admired artist in Rome at the time, Giuseppe Cesari, with a crowd of small figures amidst massive architecture. It must have seemed static and distanced. The second version turned to Raphael for a model, adding a crowd of onlookers displaying fear and pity, including a woman who presumably represented the nun. This was in line with the crowded scene requested by Cardinal Contarelli and with the tenets of Mannerism, which demanded bodies and buildings defined by perspective and drawing, but Caravaggio had already developed a personal style in which bodies were defined by light and darkness and in which backgrounds were eliminated. 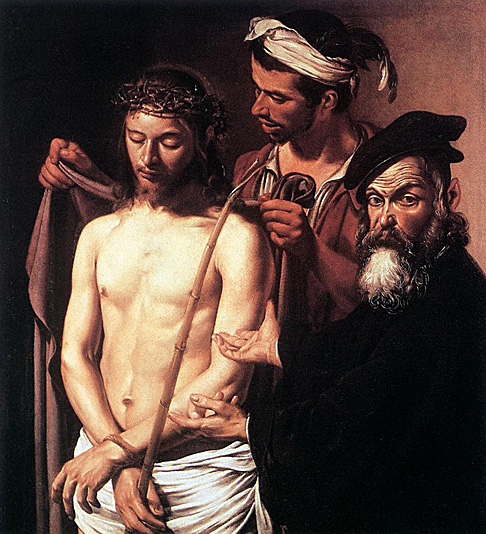 The most popular scene prior to the Counter-Reformation was of John’s baptism of Jesus, or else the infant Baptist together with the infant Jesus and Mary his mother, frequently supplemented by the Baptist’s own mother St Elizabeth. John alone in the desert was less popular, but not unknown. For the young Caravaggio, John was invariably a boy or youth alone in the wilderness. This image was based on the statement in the Gospel of Luke that “the child grew and was strengthened in spirit, and was in the deserts until the day of his manifestation to Israel.” These works allowed a religious treatment of the partly clothed youths he liked to paint at this period – not all the models have a very saintly look.
The story of John the Baptist is told in the Gospels. John was the cousin of Jesus, and his calling was to prepare the way for the coming of the Messiah. He lived in the wilderness of Judea between Jerusalem and the Dead Sea, “his raiment of camel’s hair, and a leather girdle about his loins; and his meat was locusts and wild honey.” He baptised Jesus in the Jordan, and was eventually killed by Herod Antipas when he called upon the king to reform his evil ways. John was frequently shown in Christian art, identifiable by his bowl, reed cross, camel’s skin and lamb.