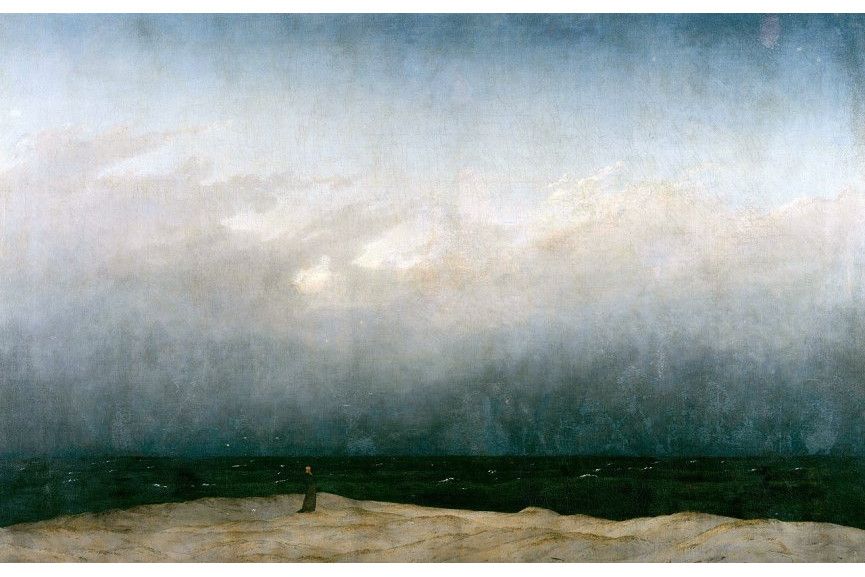 Featured image: Caspar David Friedrich – Cross in the Mountains (altarpiece Tetschen), 1807/1808. Oil on canvas, 115 × 110.5 cm (45.2 × 43.5″). Collection Galerie Neue Meister.
The leit motif of German Romanticism was the solitary figure turned towards the landscape, an embodiment of the human desire to understand nature, and is the main characteristic that differentiates German from French and British variety.

Friedrich’s work brought him renown early in his career, and contemporaries such as the French sculptor David d’Angers spoke of him as a man who had discovered “the tragedy of landscape”. Nevertheless, his work fell from favour during his later years, and he died in obscurity. As Germany moved towards modernisation in the late 19th century, a new sense of urgency characterised its art, and Friedrich’s contemplative depictions of stillness came to be seen as the products of a bygone age. The early 20th century brought a renewed appreciation of his work, beginning in 1906 with an exhibition of thirty-two of his paintings and sculptures in Berlin. By the 1920s his paintings had been discovered by the Expressionists, and in the 1930s and early 1940s Surrealists and Existentialists frequently drew ideas from his work. The rise of Nazism in the early 1930s again saw a resurgence in Friedrich’s popularity, but this was followed by a sharp decline as his paintings were, by association with the Nazi movement, interpreted as having a nationalistic aspect. It was not until the late 1970s that Friedrich regained his reputation as an icon of the German Romantic movement and a painter of international importance.
Caspar David Friedrich (5 September 1774 – 7 May 1840) was a 19th-century German Romantic landscape painter, generally considered the most important German artist of his generation. He is best known for his mid-period allegorical landscapes which typically feature contemplative figures silhouetted against night skies, morning mists, barren trees or Gothic or megalithic ruins. His primary interest as an artist was the contemplation of nature, and his often symbolic and anti-classical work seeks to convey a subjective, emotional response to the natural world. Friedrich’s paintings characteristically set a human presence in diminished perspective amid expansive landscapes, reducing the figures to a scale that, according to the art historian Christopher John Murray, directs “the viewer’s gaze towards their metaphysical dimension”.

Around this time, he found support from two sources in Russia. In 1820, the Grand Duke Nikolai Pavlovich, at the behest of his wife Alexandra Feodorovna, visited Friedrich’s studio and returned to Saint Petersburg with a number of his paintings, an exchange that began a patronage that continued for many years. [39] Not long thereafter, the poet Vasily Zhukovsky, tutor to Alexander II, met Friedrich in 1821 and found in him a kindred spirit. For decades Zhukovsky helped Friedrich both by purchasing his work himself and by recommending his art to the royal family; his assistance toward the end of Friedrich’s career proved invaluable to the ailing and impoverished artist. Zhukovsky remarked that his friend’s paintings “please us by their precision, each of them awakening a memory in our mind.” [40]
The Stages of Life (Die Lebensstufen (1835). Museum der Bildenden Künste, Leipzig. The Stages of Life is a meditation on the artist’s own mortality, depicting five ships at various distances from the shore. The foreground similarly shows five figures at different stages of life. [101]

What is he thinking as he stands there? It is natural to make the case for an optimistic interpretation: that he has trekked to the top of this rocky precipice, and now, exalted by his efforts, looks over the entire world — glorious and inspired, elevated and dignified.
What is fascinating about this painting is that it can be approached in the opposite direction — the pessimistic reading — and still make sense: a man racked with doubt looks yearningly out over a vast mountain range. There is a cauldron of swirling mist beneath his feet. He is all alone in this place, in whose limitless dimensions he recognises, by contrast, his own uncertain existence.