The positive reception of this pair of paintings contributed to Friedrich’ election as a member of the Berlin Academy and also drew the favor of Prince Friedrich Wilhelm Ludwig of Prussia, who purchased the two exhibited paintings for the royal collection; a prestigious honor. Beyond the accolades, however, this work demonstrates Friedrich’s experimental spirit. Any traditional approach to landscape painting has disappeared. At a quick glance, the compositional structure appears uneven and lacks a perspective focal point. Rather than illustrate a scene, Friedrich has created an opportunity for the viewer to experience a range of emotions, only suggested by the artist. If he had included more details, the viewer would be tempted to invent a narrative or story, but with this bare minimum, we are felt with only sensorial information.
While Friedrich was deeply religious, aspiring to paint an image that would convey the power of God more fully than possible through words, his approach was highly controversial. When the artist opened his studio to the public in 1808, allowing them to view this work, the 19 th -century art critic Wilhelm von Ramdohr argued that a landscape could not function as an altarpiece. Friedrich and his supporters publicly defended the painting and the resulting debate helped to build Friedrich’s reputation.

This was the first painting by Friedrich, one of the principal figures of German Romantic art, to enter a British public collection when purchased by the National Gallery in 1987. It had been discovered in Paris in 1982 in the collection of an exiled Russian prince. It shows a snowy landscape in which a man, having cast aside his crutches, lies against a large boulder as he prays in front of a shining crucifix protected by three fir trees (a trinity that recalls the Christian Trinity). In the distance, the silhouette of a German Gothic cathedral looms in the mist, its facade and spires echoing the shapes of the trees in the foreground.
The picture most likely dates from 1811 and appears to be a pendant (companion) to another painting, of the same date and title, in the Staatliches Museum, Schwerin. In the Schwerin picture, a similar tiny figure, leaning on a crutch, stares at a deserted snow-covered landscape under a grey-black sky. As he wanders among dead or dying oak trees, the stumps of felled trees stretch into the distance behind him. If that picture is one of desolation and despair, the National Gallery painting offers the hope of resurrection through Christian faith. The shoots of grass pushing through the snow, evergreen trees and faint pink glow of approaching dawn affirm its message of renewal and rebirth. It is a fine example of Friedrich’s use of landscape painting as a vehicle for religious feeling and personal symbolism. As he stated, his aim was not ‘the faithful representation of air, water, rocks and trees … but the reflection of [the artist’s] soul and emotion in these objects.’ 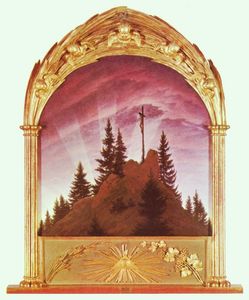 Friedrich died while his art was no longer wanted. Critics thought it too personal to understand, completely disregarding the fact that that was what made the work so original in the first place.
The artist developed an obsession with death an.

Riverside near Mustio by Victor Westerholm
There is something about all Friedrich’s paintings which make them so evocative. I find his works of art breathtaking and I stood before this painting and marvelled how such a painting could exude an overwhelming feeling of both wonderment and awe. As we have seen with other artists, they would often paint a number of versions of the same subject. In some cases the difference between the various versions would be very noticeable in others the differences would not be so obvious. Two of today’s painting fall into the latter category. The two paintings, Winter Landscape and Winter Landscape with Church look almost the same, but not quite. To confuse things slightly I am also going to look at another work of his, also entitled Winter Landscape, which is almost a prequel to the other two. Sounds confusing? Let us take a look at each of the works.

Abbey in the Oak Forest
Contemporary scholars, following the reactions of nineteenth-century viewers, have long recognized the importance of Abbey in the Oak Forest, along with its companion-piece Monk by the Sea (fig. 2), within Friedrich’s oeuvre. Friedrich’s friend and fellow painter Carl Gustav Carus called Abbey in the Oak Forest, “perhaps the most profoundly poetic work in all of modern landscape painting.”[3] The two paintings, Monk and Abbey, were completed between 1808 and 1810; Abbey was completed much more quickly than Monk, which Friedrich is known to have repainted many times.[4] Though their subject matters are quite different, the two paintings form a distinct pair through their compositional similarities: similar size, a continuous line of haze about a third of the way up each painting, similarly shallow foregrounds with tiny figures, and almost identical tonal structures characterize both works. They were completed at the height of the young artist’s fame; only three years before, he had won widespread acclaim for his most celebrated and controversial work, The Tetschen Altar, a large painting that established the religious landscape as a new genre.[5] Unlike this altarpiece, Monk by the Sea and Abbey in the Oak Forest were not painted for specific patrons; they were conceived in the artist’s studio and sent to the 1810 exhibition at the Berlin Academy, where they were purchased by Friedrich Wilhelm III of Prussia.[6]
[11] One possible reason that this interpretation has been so influential and accepted is the fact that it is echoed in a pair of sonnets written about Friedrich’s painting around 1810 by the poet Theodor Körner, entitled “Friedrichs Totenlandschaft.” The poems end with a message of religious transcendence, symbolized by the monks’ procession through the doorway towards the “ewige Lichte,” eternal light. See Helmut Börsch-Supan, “Caspar David Friedrich’s Landscapes with Self-Portraits,” Burlington Magazine 114 (September, 1972): 620–30.