It is not known how Donatello began his career, but he probably learned stone carving from one of the sculptors working on the cathedral of Florence (the Duomo) about 1400. Between 1404 and 1407 he joined the workshop of Lorenzo Ghiberti, a sculptor who in 1402 had won the competition for the doors of the Baptistery.
A pictorial tendency in sculpture had begun with Ghiberti’s narrative relief panels for the north door of the Baptistery, in which he extended the apparent depth of the scene by placing boldly rounded foreground figures against more delicately modeled settings of landscape and architecture. Donatello invented his own bold new mode of relief in his marble panel St. George Killing the Dragon (1416–17, base of the St. George niche at Orsanmichele). Known as schiacciato (“flattened out”), the technique involved extremely shallow carving throughout, which created a far more-striking effect of atmospheric space than before. The sculptor no longer modeled his shapes in the usual way but rather seemed to “paint” them with his chisel. A blind man could “read” a Ghiberti relief with his fingertips; a schiacciato panel depends on visual rather than tactile perceptions and thus must be seen.

Donatello, the early Italian Renaissance sculptor, was born Donato di Niccolo di Betto Bardi in Florence, Italy, sometime in 1386. His friends and family gave him the nickname “Donatello.” He was the son of Niccolo di Betto Bardi, a member of the Florentine Wool Combers Guild. This gave young Donatello status as the son of a craftsman and placed him on a path of working in the trades. Donatello was educated at the home of the Martellis, a wealthy and influential Florentine family of bankers and art patrons closely tied to the Medici family. It was here that Donatello probably first received artistic training from a local goldsmith. He learned metallurgy and the fabrication of metals and other substances. In 1403, he apprenticed with Florence metalsmith and sculptor Lorenzo Ghiberti. A few years later, Ghiberti was commissioned to create the bronze doors for the Baptistery of the Florence Cathedral, beating out rival artist Filippo Brunelleschi. Donatello assisted Ghiberti in creating the cathedral doors.
Around 1425, Donatello entered into a partnership with Italian sculptor and architect Michelozzo, who also studied with Lorenzo Ghiberti. Donatello and Michelozzo traveled to Rome, where they produced several architectural-sculptural tombs, including the tomb of Antipope John XXIII and the tomb of Cardinal Brancacci. These innovations in burial chambers would influence many later Florentine tombs. 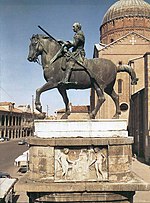 For the Basilica of St. Anthony, Donatello created, most famously, the bronze Crucifix of 1444–47 and additional statues for the choir, including a Madonna with Child and six saints, constituting a Holy Conversation, which is no longer visible since the renovation by Camillo Boito in 1895. The Madonna with Child portrays the Child being displayed to the faithful, on a throne flanked by two sphinxes, allegorical figures of knowledge. On the throne’s back is a relief of Adam and Eve. During this period—1446–50—Donatello also executed four extremely important reliefs with scenes from the life of St. Anthony for the high altar.
From 1425 to 1427, Donatello collaborated with Michelozzo on the funerary monument of the Antipope John XXIII for the Battistero in Florence. Donatello made the recumbent bronze figure of the deceased, under a shell. In 1427, he completed in Pisa a marble relief for the funerary monument of Cardinal Rainaldo Brancacci at the church of Sant’Angelo a Nilo in Naples. In the same period, he executed the relief of the Feast of Herod and the statues of Faith and Hope for the Baptistery of San Giovanni in Siena. The relief is mostly in stiacciato, with the foreground figures are done in bas-relief.

10 Famous works of Donatello (Florence, Italy, 1386-Ibidem, December 13, 1466)
Commissioned by Cardinal Cavalcanti for his funeral chapel, the image is satisfied in a tabernacle used as a classical architectural framework that harmoniously integrates the allegorical scene to the moment in which the angel announces to Mary his sanctified mission, for this the artist perpetuates a visual dialogue, of candid and graceful faces, contradictory movements, polite filigree and other refined adornments, all united with magnificence in a pictorial sculpture made in serene pietra with elements in terracotta cooked. 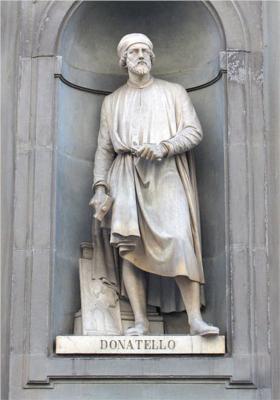 While undertaking study and excavations with Filippo Brunelleschi in Rome (1404–1407), work that gained the two men the reputation of treasure seekers, Donatello made a living by working at goldsmiths’ shops. Their Roman sojourn was decisive for the entire development of Italian art in the 15th century, for it was during this period that Brunelleschi undertook his measurements of the Pantheon dome and of other Roman buildings. Brunelleschi’s buildings and Donatello’s sculptures are both considered supreme expressions of the spirit of this era in architecture and sculpture, and they exercised a potent influence upon the artists of the age.
In 1443, Donatello was offered a prestigious and essential commission in Padua, to create an equestrian statue for condottiere Erasmo da Narmi, known by the name Gattamelata. The project was an immense undertaking: the artist set up a studio in Padua and completed most of the work between 1447 and 1450. The statue was erected in 1453, and even before its public unveiling, the king of Naples wanted Donatello to execute a similar monument for him. In the Equestrian statue of Gattamelata (1453), Donatello weaved a series of symbols and references to classical antiquity, which showed the artist’s extensive knowledge and understanding of ancient art. In the mid-1450s, he returned to Florence. During this period, he undertook a commission for a bronze statue of Saint John the Baptist (1457) for the Siena Cathedral. In his final years, Donatello worked for the Medici designing twin bronze pulpits for the San Lorenzo church. He died in 1466 in Florence, leaving the pulpits, his last work, unfinished. Eventually, the pulpits were completed by Donatello’s assistants, and are considered an important work of early Renaissance narrative sculpture.