The news of his supposed death spread all over the web and IGN did an interview with Tom Waltz, the script writer and he called the final scene a beautiful rendered scene, catching the emotion of the family. He also claimed there was no earthly way, Donatello could survive and he said it wasn’t the end. Luckily, Donatello survived the onslaught.
In Issue #46, In Harold’s lab, Donatello-as-Metalhead finishes prepping his body to be moved to the lair. He’s trying his best to put on a brave face (so to speak), but being trapped in a robot body has been an upsetting experience. The Fugitoid tries to help Donnie adapt to having his mind in a robot body while Harold sees to Metalhead’s repairs (the robot having been trashed by Bebop and Rocksteady). Raphael storms off with Alopex following behind him. Raphael starts regretting leaving Donatello behind and seeing him in a robot body is too much for Raphael to handle, but as soon as Alopex and Leonardo give him some comfort he eventually accepts Donatello as Metalhead and he, Leo and Mikey go on patrol while Donatello and the Fugitoid transfer Donnie’s turtle body to the lair of the turtles while Harold gets some equipment to help Donatello get back into his own body.

“Hey. Donnie here. I’m the brains of this operation. I invent gadgets, weapons and awesome vehicles to keep me and my brothers safe. The only thing I can’t figure out is to get our friend April to notice me. Can someone PLEASE help me on how to make April to notice me. “
Donnie is a skilled martial artist but often puts more faith in his gadgets and machinery than the more traditional methods taught to him by Master Splinter. Donnie tends to clash with Leo over these “traditional methods”, as seen with Metalhead and later, the Turtle Mech.

Teenage Mutant Ninja Turtle’s Donatello might not be the strongest in the bunch, but it’s his genius that takes the team FTW.
The “lost” season of the 2003 animated adaptation of the Teenage Mutant Ninja Turtles is referred to as the “Ninja Tribunal” arc. During this arc, the turtles are recruited by ancient ninja masters, along with four humans to deal with a major threat. In order to combat this threat, a Tengu that was the original Shredder, the turtles received amulets to channel their chi in order to develop mystical avatars. Donny, despite not being much for the spiritual, was the most focused of the brothers and was the first to summon his dragon avatar. 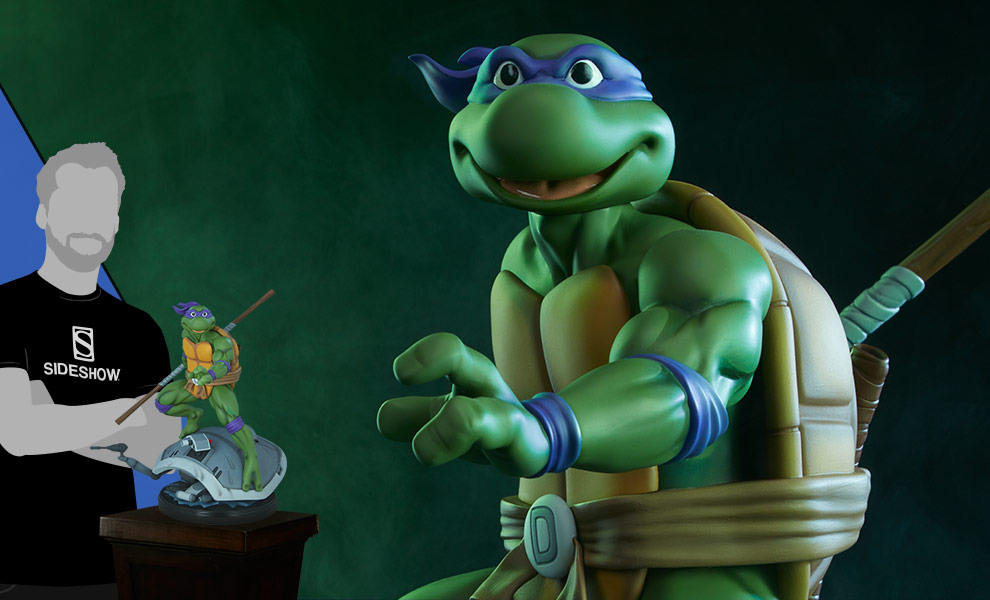 Personality: Highly Intelligent
Donatello is the smartest turtle in the room, and everyone knows it. From the moment he was mutated, Donatello has been building devices, whether they were his brothers’ toys, or the weapons that aid their ninja endeavors. As he grew, so did his fascination and ability with technology, and before long he was creating weapons, vehicles, and devices that human science couldn’t even imagine possible. However, being a brainiac means he’s predisposed to being soft spoken and studious, so he’d rather thinker than engage in ninja training. That doesn’t mean he should be underestimated, though. Having mastered the bo staff and naginata means he can certainly hold his own against any opponent.