When Cosimo was exiled from Florence, Donatello went to Rome, remaining until 1433. The two works that testify to his presence in this city, the Tomb of Giovanni Crivelli at Santa Maria in Aracoeli, and the Ciborium at St. Peter’s Basilica, bear a strong stamp of classical influence.
Between 1415 and 1426, Donatello created five statues for the campanile of Santa Maria del Fiore in Florence, also known as the Duomo. These works are the Beardless Prophet; Bearded Prophet (both from 1415); the Sacrifice of Isaac (1421); Habbakuk (1423–25); and Jeremiah (1423–26); which follow the classical models for orators and are characterized by strong portrait details. From the late teens is the Pazzi Madonna relief in Berlin. In 1425, he executed the notable Crucifix for Santa Croce; this work portrays Christ in a moment of the agony, eyes and mouth partially opened, the body contracted in an ungraceful posture.

Meanwhile, Donatello had also become a major sculptor in bronze. His earliest such work was the more than life-size statue of St. Louis of Toulouse (c. 1423) for a niche at Orsanmichele (replaced a half-century later by Verrocchio’s bronze group of Christ and the doubting Thomas). About 1460 the St. Louis was transferred to Santa Croce and is now in the museum attached to the church. Early scholars had an unfavourable opinion of St. Louis, but later opinion held it to be an achievement of the first rank, both technically and artistically. The garments completely hide the body of the figure, but Donatello successfully conveyed the impression of harmonious organic structure beneath the drapery. Donatello had been commissioned to do not only the statue but the niche and its framework. The niche is the earliest to display Brunelleschi’s new Renaissance architectural style without residual Gothic forms. Donatello could hardly have designed it alone; Michelozzo, a sculptor and architect with whom he entered into a limited partnership a year or two later, may have assisted him. In the partnership, Donatello contributed only the sculptural centre for the fine bronze effigy on the tomb of the schismatic antipope John XXIII in the Baptistery; the relief of the Assumption of the Virgin on the Brancacci tomb in Sant’Angelo a Nilo, Naples; and the balustrade reliefs of dancing angels on the outdoor pulpit of the Prato Cathedral (1433–38). Michelozzo was responsible for the architectural framework and the decorative sculpture. The architecture of these partnership projects resembles that of Brunelleschi and differs sharply from that of comparable works done by Donatello alone in the 1430s. All of his work done alone shows an unorthodox ornamental vocabulary drawn from both Classical and medieval sources and an un-Brunelleschian tendency to blur the distinction between the architectural and the sculptural elements. Both the Annunciation tabernacle in Santa Croce and the Cantoria (the singer’s pulpit) in the Duomo (now in the Museo dell’Opera del Duomo) show a vastly increased repertory of forms derived from ancient art, the harvest of Donatello’s long stay in Rome (1430–33). His departure from the standards of Brunelleschi produced an estrangement between the two old friends that was never repaired. Brunelleschi even composed epigrams against Donatello.
The cause of Donatello’s death is not widely written about, but it is known that the last years of his life were spent designing twin bronze pulpits for San Lorenzo. He died at the age of 79 or 80.

Donato di Niccolò di Betto Bardi, best known simply as Donatello, is one of the most important Italian sculptors of all time and one of the fathers of the Florentine Renaissance. Born in Florence in 1389, he invented the rilievo schiacciato technique and created the first known free-standing nude statue produced since ancient times.
Donatello’s earliest works were developed in the context of the two most important projects in the city at the time – both the Cathedral and Orsanmichele (a granary turned church) were being decorated with numerous sculptures. These works can be found at the Orsanmichele museum (upstairs), the Bargello Museum, and the Opera del Duomo museum (see below).

Around 1425, Donatello entered into a partnership with Italian sculptor and architect Michelozzo, who also studied with Lorenzo Ghiberti. Donatello and Michelozzo traveled to Rome, where they produced several architectural-sculptural tombs, including the tomb of Antipope John XXIII and the tomb of Cardinal Brancacci. These innovations in burial chambers would influence many later Florentine tombs.
By 1408, Donatello was back in Florence at the workshops of the cathedral. That year, he completed the life-sized marble sculpture, David. The figure follows a Gothic style, popular at the time, with long graceful lines and an expressionless face. The work reflects the influences of sculptors of the time. Technically, it’s very well executed, but it lacks the emotional style and innovative technique that would mark Donatello’s later work. Originally, the sculpture was intended for placement in the cathedral. Instead, however, it was set up in the Palazzo Vecchio (the town hall) as an inspiring symbol of defiance of authority to Florentines, who were engaged in a struggle with the king of Naples at the time. 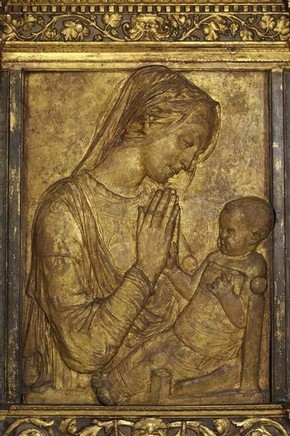 Throughout his career, Donatello made reliefs of the Madonna and Child in marble, terracotta and bronze. The earliest of these is considered to be the ‘Pazzi Madonna’ (Berlin Museums), dating from the 1420s. Much later is the V&A’s gilded terracotta ‘Madonna’, which is close in style to the Chellini bronze. At least two compositions of the Madonna were designed while Donatello was in Padua (1443вЂ“53); although no originals survive, plaster casts exist in Verona.
The crescent shape of the reveal above, combined with the bulge of the railing below, define a shallow stage for the scene and suggest a low viewing point. This is a dramatic advance over earlier roundels of the Virgin and Child on the same small scale, where the space is not defined. The architectural quality of the composition was such that within a few years (about 1457) Donatello adapted it for a large roundel in Siena Cathedral, where the spectator indeed saw it from below; the illusion of seeing figures within a ‘port-hole’ is very convincing.