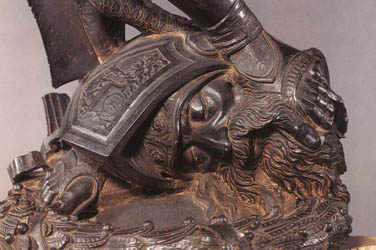 In both its representation and reception the statue ignites the homerotic gaze only to extinguish it. The statue does not leave the homoerotic gaze unpunished. Goliath is beheaded, and the active and desiring eyes of the viewer are –morally– shut with the Philistine’s. It is precisely this moral trumping that makes the homoeroticism of the David both licit and effective.
Domenico Ghirlandaio, David, 1485, from the Sassetti Chapel in Santa Trinita, Florence. 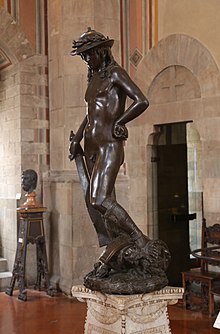 Goliath’s beard curls around David’s sandaled foot, as if the young hero is running his toes through his dead opponent’s hair. Goliath is wearing a winged helmet. David’s right foot stands firmly on the short right wing, while the left wing, considerably longer, works its way up his right leg to his groin.
The figure has been interpreted in a variety of ways. One has been to suggest that Donatello was homosexual and that he was expressing that sexual attitude through this statue. [19] [20] A second is to suggest that the work refers to homosocial values in Florentine society without expressing Donatello’s personal tendencies. [21] [22] However, during the Renaissance sodomy was illegal, and over 14,000 men had been tried in Florence for this crime. [23] So this homosexual implication would have been dangerous. A third interpretation is that David represents Donatello’s effort to create a unique version of the male nude, to exercise artistic license rather than copy the classical models that had thus far been the sources for the depiction of the male nude in Renaissance art. [24]

Donatello, David, late 1420s-late1450s. Bronze 5′ 2″ high. Museo Nazionale del Bargello, Florence.
Sometime in the mid-1400s, The Medici Family of Florence deemed Donatello qualified for commission of the family’s art. Created for Palazzo Medici, this statue was first displayed in his courtyard, making it the first freestanding nude sculpture since ancient times. Before this piece was created, most still believed that nudity should not be used in majestic and beautiful context, or to represent gods, heroes or athletes. However, this David sculpture brings back the heroic sense of nudity from classical times since it depicts David after his victory over Goliath. The representation of David in their courtyard suggests that the Medici’s believed that they were responsible for Florence’s prosperity and freedom.

5. While Donatello’s first David and his bronze David are around six and five feet tall respectively, Michelangelo’s version is more than twice their size at a towering 13 feet, five inches. Additionally, Donatello shows David directly following his triumph over the giant while the Michelangelo’s David depicts David prior to the battle.
6. Donatello’s two statues of David illustrate the development of his style and vision from the heavy Gothic influence of his youth, characterized by ornament and grace, to a more naturalistic style of his later years that was less idealized and more realistic.