Born on May 2, 1955, Donatella Versace is an Italian fashion designer and businesswoman. Having been at the helm of the Versace empire as artistic director since 1997, she has overseen the growth of the group’s luxury clothing lines alongside the expansion into accessories, home furnishings and hotels, creating a luxury lifestyle brand which was forecast to hit $850 million in revenue in 2018. In 2018, the Versace company was acquired by Michael Kors Holdings — now rebranded Capri Holdings — for a value of $2.1 billion. Donatella and her family now own €150 million ($176 million) in group stock.
The larger-than-life mogul is credited with having retained a coveted status for the Atelier Versace and ready-to-wear lines. She debuted her first collection for Atelier Spring/Summer 1998 on a see-through catwalk held over the swimming pool at the Ritz Hotel in Paris which resulted in instant acclaim from industry insiders.

Donatella has designed advertising campaigns for Versace that included Jennifer Lopez, Madonna, Courtney Love, Christina Aguilera, Jonathan Rhys Meyers, Demi Moore, Nicki Minaj, and Lady Gaga and made Beyoncé and January Jones the personae and images of Versace.
In 2008, Donatella was awarded the FGI Superstar Award. [2] Glamour named her Fashion Designer of the Year in 2012 and 2016 and Woman of the Year in 2010. [3] [4] 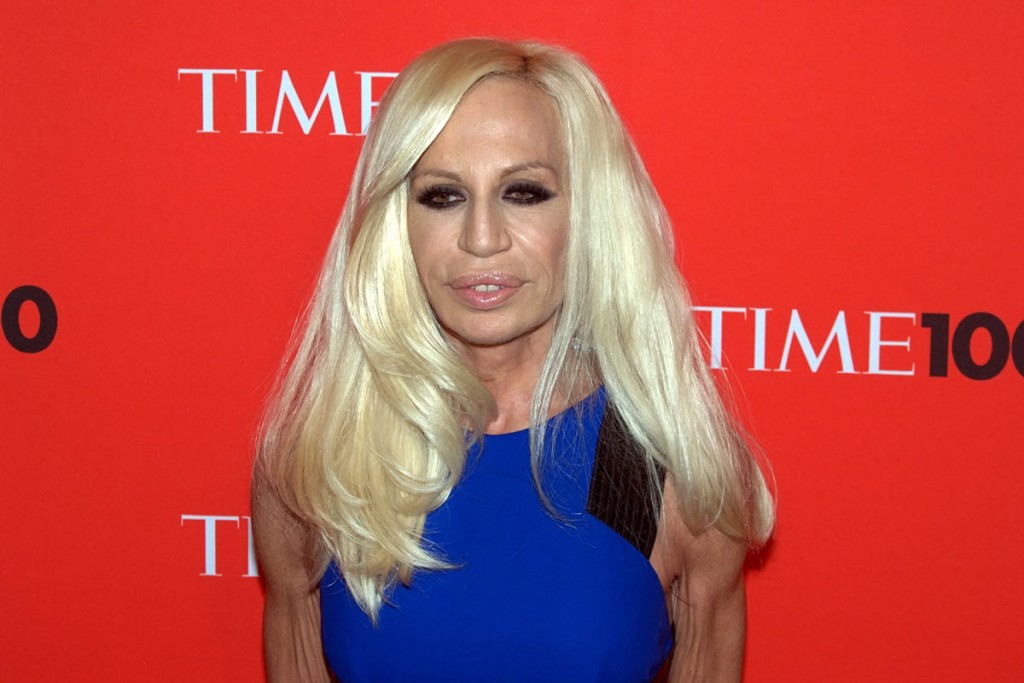 ‘Die and born again, die and born again. It’s the story of my life.’
The iconic Medusa logo is a perfect metaphor for the Versace brand’s style and core philosophy, which is empowered and seductive. According to the ancient Greek myth, looking into the eyes of Medusa would turn you into stone and her snake head of hair added to her intimidating aura. Gianni Versace chose this symbol because he wanted to empower women with his bold, sleek clothes that would render a woman ultra confident and able to manipulate the male gaze. The logo naturally appears on many Versace accessories, from sunglasses to scarves, but is increasingly making an appearance as a pattern on its clothes. In Versace’s Fall/Winter 2016 collection, an oversized Medusa icon pops up on mini-dresses, shirts, and even undergarments.

Versace also led the company through a design reinvention after her brother’s death in 1997. This task required her to remove herself from Gianni’s inspirations and stylings—one of her biggest challenges as artistic director, by her own account. She sought to make the Versace look her own and, in doing so, gained the fashion house critical acclaim and a reputation for sophistication, especially in women’s fashion. Her direction turned out such creations as a green dress worn by Lopez at the Grammy Awards ceremony in 2000. The piece was deemed an instant classic in fashion history.
Versace was born the youngest of four children. Her older sister, Tina, died of a tetanus infection at the age of 12, leaving Donatella, Santo, and Giovanni (later Gianni) to carry on the Versace name. Gianni, the second oldest, began his fashion career by moving to Milan in 1972. The next year, Donatella began studying foreign languages in Florence. Though she was studying to become a teacher, she made frequent visits to Milan to assist her brother, who valued her insights and critiques as he made his start in the fashion industry.

Donatella has led the company’s design vision ever since, helping to reinvigorate its product lines over the years. In 2009, she brought in Christopher Kane to design for Versus and reinvent the brand. After his departure, Versace collaborated with other upcoming designers on the line, also revamping the company’s haute couture line Atelier Versace. Today, Versace markets a variety of product lines, from home goods to perfume, clothing and furniture, and operates two hotels.
Versace married former model Paul Beck in 1986. The couple had two children together, Allegra (b. 1986) and Daniel (b. 1989), before divorcing. Their son was named after a song by Elton John, a close family friend. Known for her wild partying lifestyle, Versace battled drug addiction after her brother’s death. “I couldn’t stand the pain,” she told Vogue. “I had to hide my feelings. What better way to hide your feelings than with drugs?” After struggling with cocaine addiction for many years, Versace sought treatment in 2004.