humanities of the starry night 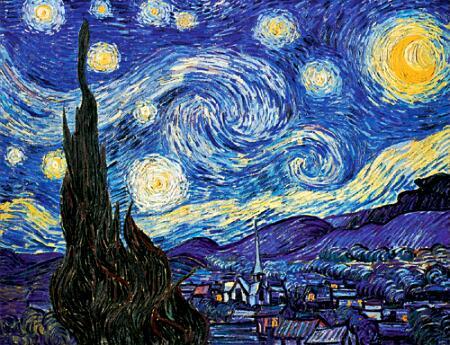 My humanities moment took place over a few years. It all started one day when I was in the 4th grade. This was one of my favorite days in elementary school because we had an assembly that day. That meant that after lunch recess we got to do something fun instead of doing math or history or science or something else that was uncolorful and boring. I was really excited to find out that it was an art assemble, which meant that afterwards we would get to paint or draw for the rest of the day. Taped all over the walls of our gym were many colorful, bright, and interesting paintings. When we were all seated on the floor I was able to get a better view of the paintings on my side of the wall. It was very interesting to look back and forth between the different sides of the gym. On the far side the paintings looked just like standard paintings but on the side near to me I could see all the little details.
The art teacher went on to explain why the paintings looked different from a distance. These were some of Vincent van Gogh’s most famous paintings and that he used a very unique style and technique. She explained that he is best known for his use of pointillism. This means that he painted using thousands of dots or strokes to create a very detailed and bright picture. My favorite picture that she showed us was of a little town at night. It had blue rolling hills and a swirly starry sky.

What has confounded the general public and academia alike for over a century is the source of van Gogh’s inspiration for Starry Night. Theories funnel into two schools, the literal and the literary. The literal includes both he painted what he saw and the hallucinatory genius arguments, while the literary suggest that inspiration blossomed from some written source: Hugo, Whitman or the Bible, usually. This presentation conceptualizes the painting should fall into both categories, but that poetic inspiration arose from Dante Alighieri’s heavenly zenith, the Trinitarian Empyrean, where, in the final lines of his epic poem, the pilgrim’s dream is realized:
“like a wheel turning in perfect balance my yearning aligned in the Loving Spirit that moves the sun and all the other stars.”

Over the last three years, Jared Baxter’s research has focused on Vincent van Gogh, in particular, how Vincent’s enduring embrace of Christianity manifested itself in his later life and artwork. Contending van Gogh painted a uniquely innovative Last Supper, he presented Van Gogh’s Last Supper: Decoding the Apotheosis in Symbolist Easter Eggs in Brighton, England, at The European Conference on Arts and Humanities 2013. The paper was subsequently published in the January, 2014 Art History Supplement and the July, 2014 Anistoriton Journal of History, Archaeology and Art History. Offering insight into how van Gogh viewed Symbolist art, in September, 2014 he presented Rembrandt’s Slaughtered Ox: Vincent van Gogh’s Ideation of the Artist’s Plight and Destiny in Providence, Rhode Island at IAFOR’s North American Conference on Arts and Humanities. The paper was distilled and published as an article in Eye Magazine’s Winter, 2014 issue. Very much a product of the IAFOR Conference series, he credits these symposia with helping him find his voice in the academic community. With three more papers on the go, offering new insights into Quay with Sand Barges, The Red Vineyard and Portrait of Dr Gachet, he is completing a nonfiction narrative, Discovering van Gogh: Vincent’s Last Supper.
Existing van Gogh letters reveal ten Alighieri references. Vincent’s affinity with the poet established, the degree is calibrated, considering his rapacity as a reader, progress as a pilgrim and reverence for those whom held Dante in highest esteem including Giotto, Delacroix, Hugo, Carlyle, Corot, Doré and Rodin. Upon comparing existing theories (Boime, Schapiro, Soth and Werness), the Empyrean shines as the simplest.

As a matter of fact, one of the influential painters on Van Gogh’s works, Delacroix, had used citron-yellow to define the figure of Christ; a color van Gogh used later for stars (Soth, 1986), which refers to a spiritual association; an association that represents Agony in the Garden where Jesus faced the reality of coming to crucifixion, compared to van Gogh’s reality where he was dealing with his religious struggles. Van Gogh’s inability to paint Agony in the Garden is therefore a reflection of his agony when he was painting Starry Night.
Whereas some have interpreted Starry Night as a representation of the biblical story of Joseph’s dream, of his fraternal betrayal where the sun, where the moon and eleven stars made obeisance to him, others have contended that the moon and the stars symbolize Jesus and his apostles. However, if the painting was a representation of Christianity the church would not be placed in a position where it is overwhelmed by a Cypress (Hong, 2007). Other scholars, such as Meyer Schapiro argued that there is a possibility that the painting could be an unconscious reference to the passage in Revelation which describes a vision of a woman “robed with the sun, beneath her feet the moon, and on her head a crown of twelve stars” (Soth, 1986).