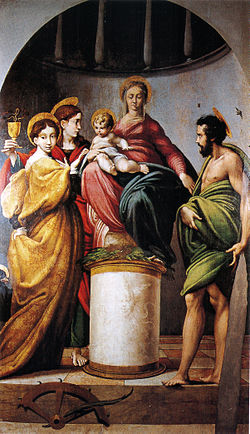 In 1531, Parmigianino received a commission for two altarpieces, depicting Saint Joseph and Saint John the Baptist, from the unfinished church of Santa Maria della Steccata. The brotherhood overseeing the church advanced him salary and promised him the supplies and materials; however, by 1535, the project was unfinished. In December, he nominated Don Nicola Cassola, a Parman cleric at the Roman Curia, to act as his legal representative. Parmigianino authorized him to collect the 50 gold scudi from Bonifazio Gozzadini for the Madonna with St. John the Baptist and St. Zacharias.
He resided in Bologna for nearly three years. At around 1528, he painted the Madonna and Child with Saints (Pinacoteca, Bologna), then later in 1528, he painted Madonna con la Rosa (Dresden) and Madonna with Saint Zachariah (Uffizi). By 1530 Parmigianino had returned to Parma.

In the lower right-hand corner of the painting is an enigmatic scene, with a row of marble columns and the emaciated figure of St. Jerome. A depiction of St. Jerome was required by the commissioner because of the saint’s connection with the adoration of the Virgin Mary.

In 1524, he travels to Rome with five small paintings including the Circumcision of Christ and his Self-portrait in a Convex Mirror, seeking patronage of the Medici pope, Clement VII. Vasari records that in Rome, Parmigianino was ‘celebrated as a Raphael reborn’. In January 1526, Parmigianino and his uncle, Pier Ilario, agreed with Maria Bufalina from Citta di Castello, to decorate the church of San Salvatore in Lauro with an altarpiece of the Vision of Saint Jerome (1526-7, National Gallery, London). Like many other artists, within a year the Sack of Rome caused Parmigianino to flee.
Girolamo Francesco Maria Mazzola, also known as Francesco Mazzola or more commonly as Parmigianino (a nickname meaning ‘the little one from Parma’) or sometimes “Parmigiano”, was a prominent Italian Mannerist painter and printmaker active in Florence, Rome, Bologna, and his native city of Parma. 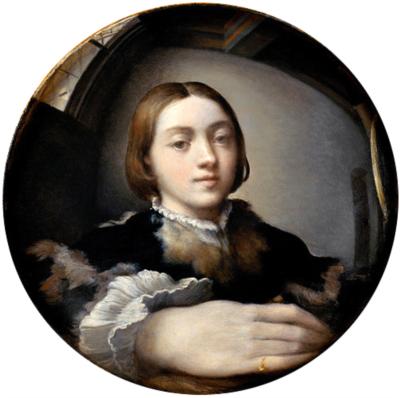 His prodigious and individual talent has always been recognised, but his career was disrupted by war, especially the Sack of Rome in 1527, three years after he moved there, and then ended by his death at only 37. He produced outstanding drawings, and was one of the first Italian painters to experiment with printmaking himself. While his portable works have always been keenly collected and are now in major museums in Italy and around the world, his two large projects in fresco are in a church in Parma and a palace in a small town nearby. This in conjunction with their lack of large main subjects has resulted in their being less well known than other works by similar artists. He painted a number of important portraits, leading a trend in Italy towards the three-quarters or full-length figure, previously mostly reserved for royalty.
In 1524, he traveled to Rome with five small paintings, including the Circumcision of Jesus and his Self-portrait in a Convex Mirror, seeking patronage of the Medici pope, Clement VII. Vasari records that in Rome, Parmigianino was “celebrated as a Raphael reborn”. In January 1526, Parmigianino and his uncle, Pier Ilario, agreed with Maria Bufalina from Città di Castello, to decorate the church of San Salvatore in Lauro with an altarpiece of the Vision of Saint Jerome (1526–27, National Gallery, London). Within a year, the Sack of Rome caused Parmigianino, and many other artists, to flee.