The late Cardinal Matteo Contarelli (for whom the chapel is named) bequeathed funds to deck the place out with tributes to the saint for whom he was named. The gig originally went to popular Mannerist painter Cavaliere d’Arpino (also known as Il Giuseppino or Giuseppe Cesari), but after completing some frescoes on the chapel’s ceiling, Cavaliere realized he was overbooked. He gave up the commission, paving the way for one of Caravaggio’s most admired works.
The Calling of St. Matthew measures 10.5 feet by 11 feet!

Most writers on the Calling assume Saint Matthew to be the bearded man, and see him to be pointing at himself, as if to ask “Me?” in response to Christ’s summons. This theory is strengthened when one takes into consideration the other two works in this series, The Inspiration of Saint Matthew, and The Martyrdom of Saint Matthew. The bearded man who models as Saint Matthew appears in all three works, with him unequivocally playing the role of Saint Matthew in both the “Inspiration” and the “Martyrdom”.
The three adjacent Caravaggio canvases in the Contarelli chapel represent a decisive shift from the idealising Mannerism of which d’Arpino was the last major practitioner, to the newer, more naturalistic and subject-oriented art represented by Caravaggio and Annibale Carracci: they were highly influential in their day. 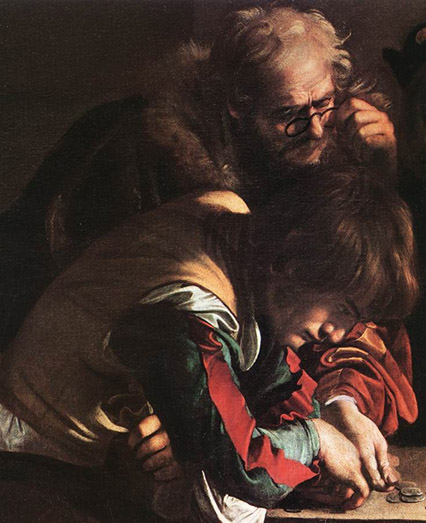 With these works realism won its battle with Mannerism, but it is in the cycle of the life of St. Matthew in the Contarelli Chapel that Caravaggio’s realistic naturalism first fully appears. Probably through the agency of del Monte, Caravaggio obtained, in 1597, the commission for the decoration of the Contarelli Chapel in the Church of San Luigidei Francesi in Rome. This commission established him, at age 24, as a pictor celeberrimus, a “renowned painter,” with important protectors and clients. The task was an imposing one. The scheme called for three large paintings of scenes from the saint’s life: St. Matthew and the Angel, The Calling of St. Matthew, and The Martyrdom of St. Matthew. The execution (1598–1601) of all three, in which Caravaggio substituted a dramatic contemporary realism for the traditional pictorial formulas used in depicting saints, provoked public astonishment. Perhaps Caravaggio was waiting for this test, on public view at last, to reveal the whole range of his diversity. His novelty in these works not only involves the surface appearance of structure and subject but also the sense of light and even of time. The first version of the canvas that was to go over the altar, St. Matthew and the Angel, was so offensive to the canons of San Luigi dei Francesi, who had never seen such a representation of a saint, that it had to be redone. In this work the evangelist has the physical features of a plowman or a common labourer. His big feet seem to stick out of the picture, and his posture, legs crossed, is awkward almost to the point of vulgarity. The angel does not stand graciously by but forcefully pushes Matthew’s hand over the page of a heavy book, as if he were guiding an illiterate. What the canons did not understand was that Caravaggio, in elevating this humble figure, was copying Christ, who had himself raised Matthew from the street.
Caravaggio’s three paintings for the Contarelli Chapel not only caused a sensation in Rome but also marked a radical change in his artistic preoccupation. Henceforth he would devote himself almost entirely to the painting of traditional religious themes, to which, however, he gave a whole new iconography and interpretation. He often chose subjects that are susceptible to a dramatic, violent, or macabre emphasis, and he proceeded to divest them of their idealized associations, taking his models from the streets. Caravaggio may have used a lantern hung to one side in his shuttered studio while painting from his models. The result in his paintings is a harsh, raking light that strikes across the composition, illuminating parts of it while plunging the rest into deep shadow. This dramatic illumination heightens the emotional tension, focuses the details, and isolates the figures, which are usually placed in the foreground of the picture in a deliberately casual grouping. This insistence on clarity and concentration, together with the firm and vigorous drawing of the figures, links Caravaggio’s mature Roman works with the classical tradition of Italian painting during the Renaissance.