Ingres always enjoyed recycling themes and devices from earlier periods. Here, the overall theme is basically a revision of the ‘reclining venus’ – as seen in The Sleeping Venus (1518, Gemaldegalerie Alte Meister, Dresden) by Giorgione (1477-1510), and The Venus of Urbino (1538, Uffizi, Florence) by Titian. The idea of using a reclining woman who looks back over her shoulder may have come from Jacques-Louis David’s society portrait of Madame Recamier (1800, Louvre). Meanwhile the anatomical distortions are (as in the Valpincon picture) taken from the Mannerism era – see, for instance, the famous Madonna of the Long Neck (1535, Uffizi, Florence) by Parmigianino (1503-40).

This eclectic mix of styles, combining classical form with Romantic themes, prompted harsh criticism when it was first shown in 1814. Critics viewed Ingres as a rebel against the contemporary style of form and content. When the painting was first shown in the Salon of 1819, one critic remarked that the work had “neither bones nor muscle, neither blood, nor life, nor relief, indeed nothing that constitutes imitation”. [4] This echoed the general view that Ingres had disregarded anatomical realism. [5] Ingres instead favored long lines to convey curvature and sensuality, as well as abundant, even light to tone down the volume. [5] Ingres continued to be criticized for his work until the mid-1820s. [3]
Grande Odalisque, also known as Une Odalisque or La Grande Odalisque, is an oil painting of 1814 by Jean Auguste Dominique Ingres depicting an odalisque, or concubine. Ingres’ contemporaries considered the work to signify Ingres’ break from Neoclassicism, indicating a shift toward exotic Romanticism. 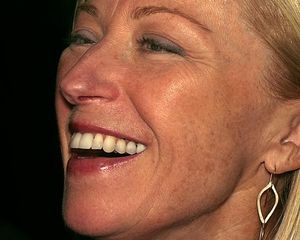 Posthumous Reception:
The voyeurism, temptation and enigma of La Grande Odalisque is said to have had a profound effect on artists like Edgar Degas and Pablo Picasso. The works has also influenced Cindy Sherman and David Hockney.
A favorite subject of Ingres was the female nude. He loved to imaginatively enhance the female form as he considered it ideal. Often this meant strong anatomical distortions. La Grande Odalisque, one of his most well known nudes, is a fine display of such achievements. His use of color, lighting and the tone he evokes is unique, combined on the canvas in a way only Ingres could make successful. 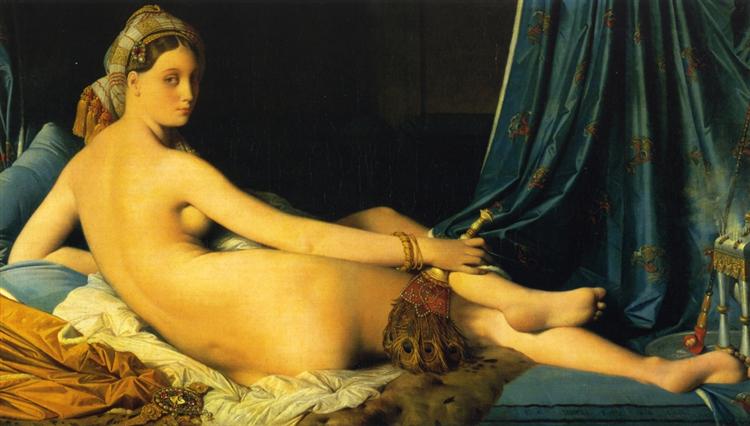 The painting was commissioned by Napoleon’s sister, Queen Caroline Murat of Naples, and finished in 1814. Ingres drew upon works such as Dresden Venus by Giorgione, and Titian’s Venus of Urbino as inspiration for his reclining nude figure, though the actual pose of a reclining figure looking back over her shoulder is directly drawn from the 1809 Portrait of Madame Récamier by Jacques-Louis David.
Ingres portrays a concubine in languid pose as seen from behind with distorted proportions. The small head, elongated limbs, and cool color scheme all reveal influences from Mannerists such as Parmigianino, whose Madonna with the Long Neck was also famous for anatomical distortion.