In La Grande Odalisque, the concubine is lying on a divan in a suggestive pose with her face turned towards us. Her arm guides our eye to the luxurious silk drapes, while her right foot and left elbow highlight the sumptuous velvet cushions. The cold aquamarine of the silk drape with its decoration of red flowers intensifies the warmth of the her flesh tones. (Note: For more about the pigments used by Ingres, see: 19th-Century Colour Palette.)
An important contributor to Neoclassical art, Ingres was strongly influenced by the High Renaissance painting of Raphael (1483-1520) and Titian (1485-1576), as well as the Baroque painting of classicist Nicolas Poussin (1594-1665). Thus Ingres may be said to represent the conservative strand of French painting, being primarily concerned with conserving and refining the classical traditions that were rediscovered during the Italian Renaissance. His career, however, belies such a tidy summary, being a jumble of contradictions. He was a master of drawing, yet some of his most famous figure painting is anatomically inaccurate; he was seen as the doyen of academic art, yet he was rejected by the French academy until the age of 44; his greatest ambition was to be recognized for his history painting, yet his strongest forte was portrait art and figure painting involving just a few figures; in his outlook and way of life he was conventionally bourgeois, yet according to the art critic Charles Baudelaire (1821-67) his best paintings show him to be highly sensual. In any event, his skill at painting was undeniable: at the age of 17 he joined the workshop of Jacques-Louis David (1748-1825), one of France’s greatest neoclassical artists, and at 21 he won the coveted Prix de Rome. His greatest masterpieces are now thought to include: The Valpincon Bather (1808); La Grande Odalisque (1814); Oedipus and the Sphinx (1808-27); Portrait of Monsieur Bertin (1832); The Turkish Bath (1863) – all in the Louvre – and Portrait of Madame Moitessier (1856, National Gallery, London).

The painting was commissioned by Napoleon’s sister, Queen Caroline Murat of Naples, [1] and finished in 1814. [2] Ingres drew upon works such as Dresden Venus by Giorgione, and Titian’s Venus of Urbino as inspiration for his reclining nude figure, though the actual pose of a reclining figure looking back over her shoulder is directly drawn from the 1800 Portrait of Madame Récamier by Jacques-Louis David.
Stemming from the initial criticism the painting received, the figure in Grande Odalisque is thought to be drawn with “two or three vertebrae too many.” [1] [6] Critics at the time believed the elongations to be errors on the part of Ingres, but recent studies show the elongations to have been deliberate distortions. [7] Measurements taken on the proportions of real women showed that Ingres’s figure was drawn with a curvature of the spine and rotation of the pelvis impossible to replicate. [6] It also showed the left arm of the odalisque is shorter than the right. The study concluded that the figure was longer by five instead of two or three vertebrae and that the excess affected the lengths of the pelvis and lower back instead of merely the lumbar region. [6]

Figure 1. La Grande Odalisque
Instead, Ingres has created a cool aloof eroticism accentuated by its exotic context. The peacock fan, the turban, the enormous pearls, the hookah (a pipe for hashish or perhaps opium), and of course, the title of the painting, all refer us to the French conception of the Orient. Careful—the word “Orient” does not refer here to the Far East so much as the Near East or even North Africa. 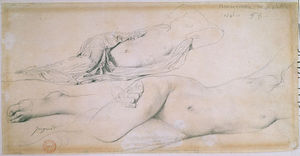 Ingres’ sensual fascination with the Orient was no secret. He displayed his attraction for this foreign eroticism in many of his works but his most famous paintings on this theme are La Grande Odalisque and The Turkish Bath. Ingres’ Double Study for Odalisque with Slave is a sketch of a figure study of the same subject that has also received critical attention.
La Grande Odalisque