The painting measures 130.2 cm × 185.4 cm ( 51 1 ⁄4 in × 73 in). [5]
The Hay Wain was voted the second most popular painting in any British gallery, second only to Turner’s Fighting Temeraire, in a 2005 poll organised by BBC Radio 4’s Today programme. [4] On 28 June 2013 a protester, reported to be connected with Fathers 4 Justice, glued a photograph of a young boy to the painting while it was on display at the National Gallery. The work was not permanently damaged. [9] 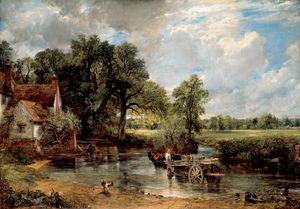 In The Hay Wain John Constable chose to paint a rural landscape which runs into the distance in sun-drenched meadows, offset by the cool waters of the pool in the foreground. The theme of this painting is very much rural life and the beauty of the landscape which the artist loved so much.
Color palette:
In keeping with the artist’s love of nature, natural tones are predominant in The Hay wain and there is contrast between the pool of water, the tall delicate trees and the strong brick house to the left.

The small empty boat on the right is based on a study Constable made in 1809 – already used in The White Horse (National Gallery of Art, Washington) in 1819 and later used again in Salisbury Cathedral from the Meadows (Scottish National Gallery, Edinburgh) of 1831. It demonstrates Constable’s economy with his source materials, his instinct for local detail and his ability to balance a composition – for small though it is, the boat balances the house on the left and the hay wagon in the centre. The thick red fringes decorating the horses‘ leather collars add a bright note of colour.
The view is of the millpond at Flatford. Flatford Mill was a watermill for the grinding of corn, leased and operated by the Constable family for nearly a hundred years. It still survives and is about a mile from Constable’s birthplace at East Bergholt, Suffolk. In The Hay Wain , the mill is out of sight – we just glimpse the edge of its red brick wall on the extreme right. The building on the left of the picture is the house, which also still survives, occupied during Constable’s time by the tenant farmer Willy Lott. Although Constable’s parents moved from the mill house to a residence in East Bergholt before he was born, he would have known this view of Willy Lott’s house extremely well. 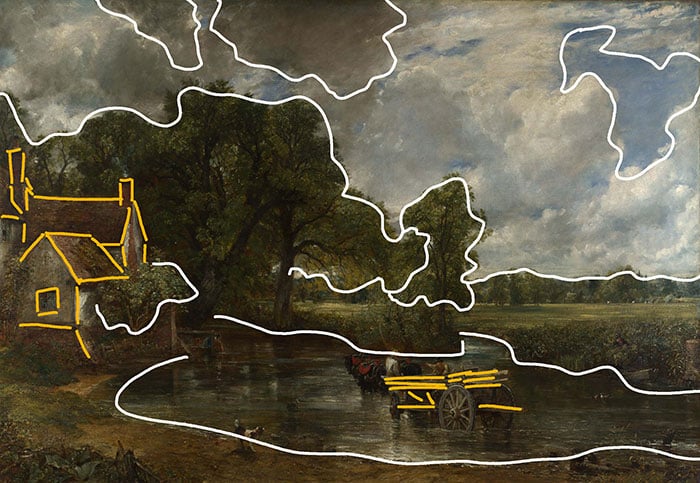 Below is the painting with a three-by-three grid over the top. The horizon line is positioned just above the bottom third of the painting, allowing more room for the sky on the right-hand side. Also, notice how the patches of light hitting the land in the distance help reiterate the horizon line.
The colors are mostly restrained and muted, with the most saturated color being the small bursts of red used around the horses. This red is far from the vivid cadmium red you get from a tube, but it is saturated enough to draw your attention towards this area. Remember, if you want to draw attention towards a certain area, you only need to make it stand out compared to its surroundings.