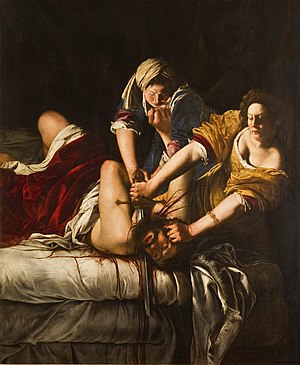 Judith Slaying Holofernes is a 1620–1621 painting by Artemisia Gentileschi, now in the Uffizi Gallery in Florence. Like her earlier version of the work, Judith is thought to be a self-portrait. This connection transpires not just from their shared gender, but also from Artemisia’s disturbing experience at the hands of her father’s colleague, Agostino Tassi. When Artemisia was only seventeen, her neighbor—an older woman named Tuzia—let Tassi into Artemisia’s home through an adjoining door. There, he raped his student, while Artemisia called out for help. Artemisia’s father, Orazio Gentileschi, sued Agostino Tassi for taking his only daughter’s virginity. [1]
During the trial, Artemisia recounts the altercation with Tassi and her effort to defend herself, stating “After he had done his business he got off of me. When I saw myself free, I went to the table drawer and took a knife and moved toward Agostino, saying, ‘I’d like to kill you with this knife because you have dishonored me.’” [1]

This painting is remarkable for several reasons, specifically the controversial fact that its creator was female. The artist was Artemisia Gentileschi, and though she was viewed skeptically by her fellow 17 th century Italians, her works are greatly esteemed in modernity. Her style is reminiscent of the famous Caravaggio, for she was a master of light and shadow and liked to experiment with dark color tones. She particularly liked to paint images of strong or notorious biblical women, as is evident in her depiction of the Old Testament heroine Judith in Judith and Holofernes.
Location: Uffizi Gallery, Florence

One of the most famous and skilled painters of the Baroque era, Artemisia Gentileschi was centuries ahead of her time. Among the first women artists to achieve success in the 17th century, she brought to her work an electric sense of narrative drama and a unique perspective that both celebrated and humanized strong women characters. Rediscovered by feminist art historians in the past few decades, Gentileschi has inspired a spate of books, both scholarly and popular, and a number of films. But it is the sensational painting Judith Slaying Holofernes (c. 1620) that epitomizes her career. The Art Institute of Chicago, in collaboration with the Foundation for Italian Art and Culture (FIAC), is thrilled to present this stunning work, an exceptional loan from the Uffizi Gallery in Florence, for its first display in Chicago.
The daughter of painter Orazio Gentileschi, Artemisia trained in her father’s workshop and quickly earned acclaim, completing her first signed painting, a dramatic yet sensitive rendering of Susanna and the Elders, when she was just 17. Her style bears some resemblance to that of her father, who was a follower of Caravaggio, but Artemisia’s paintings stand out for their theatricality—the raw emotional intensity of a few figures daringly arranged. The younger Gentileschi’s work is also distinctive in its focus on powerful heroines, capturing both their vulnerability and strength, a feature many attribute to events in Gentileschi’s own life. At the age of 18, she was raped by one of her father’s colleagues, Agostino Tassi. He was convicted in a trial a year later after Artemisia was tortured to “confirm” her testimony, but Tassi was never punished. Within months of the conclusion of the trial, Artemisia was quickly married and moved to Florence with her new husband.