The model for Judith is probably the Roman courtesan Fillide Melandroni, who posed for several other works by Caravaggio around this year; the scene itself, especially the details of blood and decapitation, were presumably drawn from his observations of the public execution of Beatrice Cenci in 1599. [4]
Judith Beheading Holofernes is a painting of the biblical episode by Caravaggio, painted in c. 1598–1599 or 1602 . [1] The widow Judith first charms the Syrian general Holofernes, then decapitates him in his tent. The painting was rediscovered in 1950 and is part of the collection of the Galleria Nazionale d’Arte Antica in Rome. The recent exhibition ‘Dentro Caravaggio’ Palazzo Reale, Milan (Sept 2017-Jan 2018), suggests a date of 1602 on account of the use of light underlying sketches not seen in Caravaggio’s early work but characteristic of his later works. The exhibition catalogue (Skira, 2018, p88) also cites biographer artist Giovanni Baglione’s account that the work was commissioned by Genoa banker Ottavio Costa.

In the painting, Judith comes in with her maid – surprisingly and menacingly – from the right, against the direction of reading the picture. The general is lying naked on a white sheet. Paradoxically, his bed is distinguished by a magnificent red curtain, whose colour crowns the act of murder as well as the heroine’s triumph.
The first instance in which Caravaggio would chose such a highly dramatic subject, the Judith is an expression of an allegorical-moral contest in which Virtue overcomes Evil. In contrast to the elegant and distant beauty of the vexed Judith, the ferocity of the scene is concentrated in the inhuman scream and the body spasm of the giant Holofernes. Caravaggio has managed to render, with exceptional efficacy, the most dreaded moment in a man’s life: the passage from life to death. The upturned eyes of Holofernes indicate that he is not alive any more, yet signs of life still persist in the screaming mouth, the contracting body and the hand that still grips at the bed. The original bare breasts of Judith, which suggest that she has just left the bed, were later covered by the semi-transparent blouse. 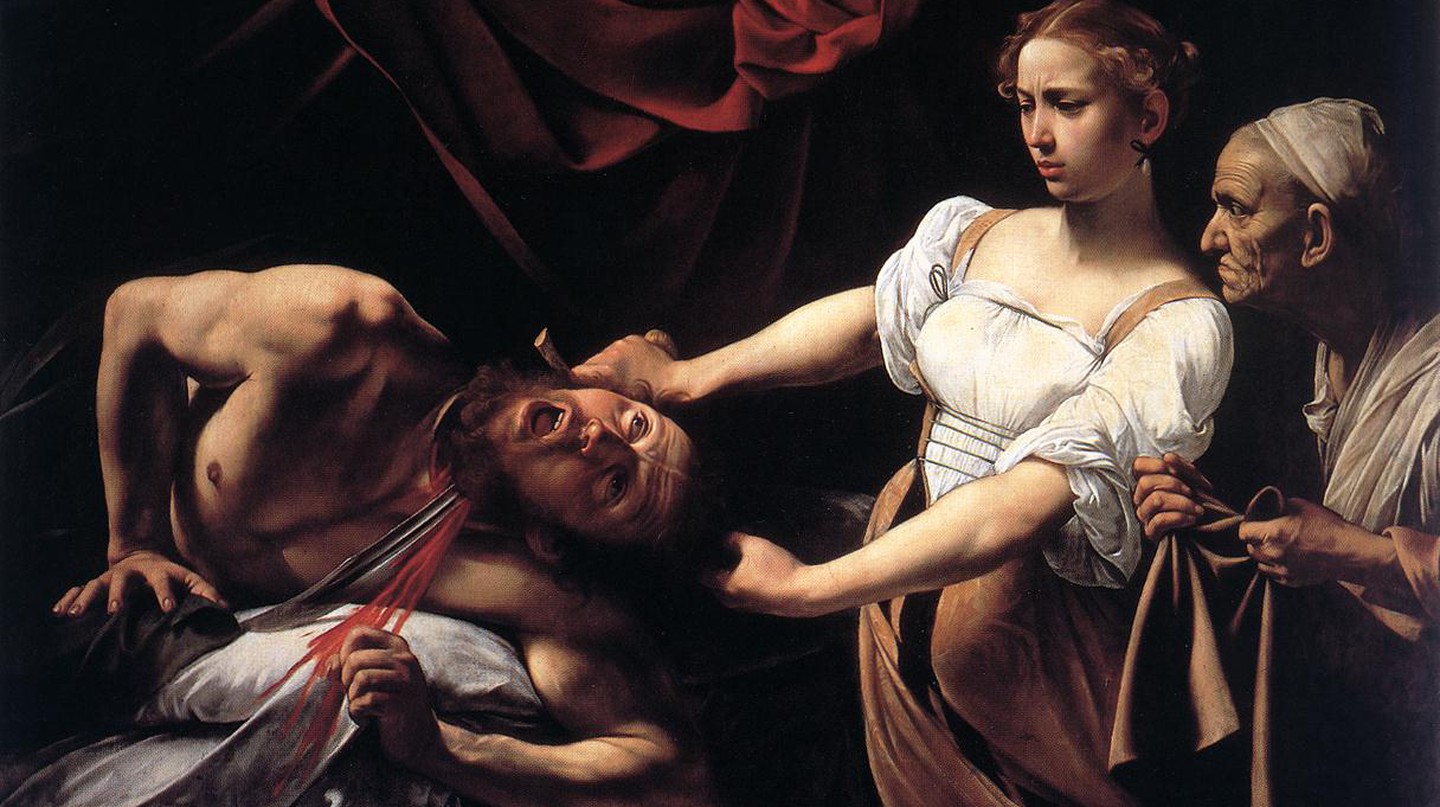 Judith Beheading Holofernes went on display in Paris after its rediscovery in early 2014 and, for good reason, has sparked controversy within the art world.
Caravaggio, whose name in full was Michelangelo Merisi da Caravaggio, was active from approximately 1595 up until his death in 1610. The ‘greatest artist in Rome’, who was a pioneer on the Baroque artistic scene, lived an unconventional and somewhat violent life, and was even reported to have killed a man.