An important contributor to Neoclassical art, Ingres was strongly influenced by the High Renaissance painting of Raphael (1483-1520) and Titian (1485-1576), as well as the Baroque painting of classicist Nicolas Poussin (1594-1665). Thus Ingres may be said to represent the conservative strand of French painting, being primarily concerned with conserving and refining the classical traditions that were rediscovered during the Italian Renaissance. His career, however, belies such a tidy summary, being a jumble of contradictions. He was a master of drawing, yet some of his most famous figure painting is anatomically inaccurate; he was seen as the doyen of academic art, yet he was rejected by the French academy until the age of 44; his greatest ambition was to be recognized for his history painting, yet his strongest forte was portrait art and figure painting involving just a few figures; in his outlook and way of life he was conventionally bourgeois, yet according to the art critic Charles Baudelaire (1821-67) his best paintings show him to be highly sensual. In any event, his skill at painting was undeniable: at the age of 17 he joined the workshop of Jacques-Louis David (1748-1825), one of France’s greatest neoclassical artists, and at 21 he won the coveted Prix de Rome. His greatest masterpieces are now thought to include: The Valpincon Bather (1808); La Grande Odalisque (1814); Oedipus and the Sphinx (1808-27); Portrait of Monsieur Bertin (1832); The Turkish Bath (1863) – all in the Louvre – and Portrait of Madame Moitessier (1856, National Gallery, London).
Ingres always enjoyed recycling themes and devices from earlier periods. Here, the overall theme is basically a revision of the ‘reclining venus’ – as seen in The Sleeping Venus (1518, Gemaldegalerie Alte Meister, Dresden) by Giorgione (1477-1510), and The Venus of Urbino (1538, Uffizi, Florence) by Titian. The idea of using a reclining woman who looks back over her shoulder may have come from Jacques-Louis David’s society portrait of Madame Recamier (1800, Louvre). Meanwhile the anatomical distortions are (as in the Valpincon picture) taken from the Mannerism era – see, for instance, the famous Madonna of the Long Neck (1535, Uffizi, Florence) by Parmigianino (1503-40).

Hence, similarly to the pictorial language among female patrons mentioned earlier, Oriental cultural productions from the same time that might certainly have influenced Ingres and Murat. The general fascination and interest was, in part, sparked by Napoleon’s campaign in Egypt in 1789-1799 as well as by the detailed description of the region, its culture and customs in a huge publication called Description de l’Egypte, which was published from 1809 to 1822.[22] Lord Byron’s poem The Corsair, also published in 1814, featured a harem slave as well. Lady Montagu just published her travel narratives about her travels to Turkey.
Focusing on the discourse and narrativity instead of the sex of the commissioner or artist and what this might say about the gaze, the feminist film scholar Teresa de Lauretis has coined the terms “double identification” and “narrative image”. De Lauretis stresses the (unconscious) role of discourse that every subject is embedded in:

The painting was commissioned by Napoleon’s sister, Queen Caroline Murat of Naples, [1] and finished in 1814. [2] Ingres drew upon works such as Dresden Venus by Giorgione, and Titian’s Venus of Urbino as inspiration for his reclining nude figure, though the actual pose of a reclining figure looking back over her shoulder is directly drawn from the 1800 Portrait of Madame Récamier by Jacques-Louis David.
Grande Odalisque attracted wide criticism when it was first shown. It is renowned for the elongated proportions and lack of anatomical realism. The work is owned by the Louvre Museum, Paris which purchased the work in 1899.

This woman lying on a divan is offering herself because she is nude and turns her face towards us. The painting’s title, which means “harem woman,” and the accessories around her conjure up the sensuous Orient. But the woman is also discreet because she shows only her back and part of one breast. The nude was a major theme in Western art, but since the Renaissance figures portrayed in that way had been drawn from mythology; here Ingres transposed the theme to a distant land. The subject of the odalisque fascinated Boucher in the eighteenth century and was later chosen as a theme by Théodore Chassériau (1819-1856), one of Ingres’s pupils. Throughout his career, many of Ingres’s works feature Orientalist themes, such as The Turkish Bath (Louvre), which he painted towards the end of his life. The female nude, historical scenes, and the portrait were Ingres’s favorite genres.
Caroline Murat (1782-1839), Napoleon’s sister and the queen of Naples, commissioned this painting in 1813. It was probably a matching piece to another nude, La Dormeuse de Naples, destroyed in 1815. La Grande Odalisque was painted in Rome, where Ingres had arrived in 1806 to complete a fellowship at the Académie de France. The artist remained in Italy until 1824 because his art was unpopular in Paris. The works he exhibited at the Salon of 1806 (Caroline Rivière and Madame Rivière, Louvre), and the paintings he sent from Rome (The Valpinçon Bather, and Oedipus and the Sphinx, Louvre) were criticized. The exhibition of La Grande Odalisque at the Salon of 1819 confirmed that the critics didn’t understand Ingres’s style. They admonished him for disregarding anatomical reality, which set him apart from his teacher, Jacques Louis David (1748-1825). 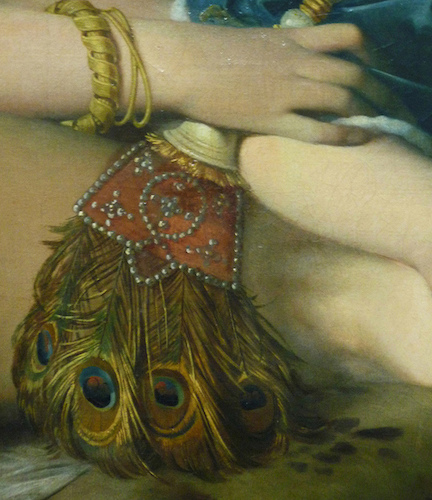 Here a languid nude is set in a sumptuous interior. At first glance this nude seems to follow in the tradition of the Great Venetian masters, see for instance, Titian’s Venus of Urbino of 1538 (left). But upon closer examination, it becomes clear that this is no classical setting. Instead, Ingres has created a cool aloof eroticism accentuated by its exotic context. The peacock fan, the turban, the enormous pearls, the hookah (a pipe for hashish or perhaps opium), and of course, the title of the painting, all refer us to the French conception of the Orient. Careful—the word “Orient” does not refer here to the Far East so much as the Near East or even North Africa.
Sign up for our newsletter!