It is pertinent to our concerns today about street violence that the men of that time drew sword and knives so readily that many arguments escalated and ended in bloodshed. Who would have thought some 500 years later that the holding of weapons on the street would still be regarded by some as offering protection.
Well, weren’t there any women in the series worth mentioning? Yes, a number of them, who had to cope with arranged marriages, domineering husbands, and painful childbirth. They are traded like commodities. Yet the Medici women had more power than most, mainly because they were well chosen matches from noble families with powerful allies in their own right. They had some clout, though little decision-making power. There is a poignant story of Guiliano’s secret love affair with Simonetta Vespucci and then the backlash from her husband. It is suggested that the lovers were the sitters for the famous Sandro Botticelli painting ‘Venus and Mars’. I cannot look at that painting in the National Gallery in the same way again. Botticelli was just one of the artists supported by the Medici family. 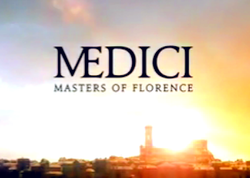 The series is broadcast in 190 countries countries worldwide, including on SBS in Australia, [17] on Fox Premium in Argentina, SFR’s premium SVOD service Zive in France, Sky 1 in Germany, [18] on RTP1 in Portugal, and on RTS2 in Serbia. It was also sold in Japan, Israel, and New Zealand. [19]

Giuliano did have a real lover, Fioretta, who was pregnant when he died. Their son Giulio was raised by Lorenzo and grew up to become Pope.
While the creators of this series have remained faithful in the rendering of all the various political intrigues, when it comes to the love stories, they’ve let their imaginations run wild.

Simonetta is swept up into Lorenzo and Giuliano de’ Medici’s glittering circle of politicians, poets, artists, and philosophers. The men of Florence—most notably the rakish Giuliano de’ Medici—become enthralled with her beauty. That she is educated and an ardent reader of poetry makes her even more desirable and fashionable.
Primavera by Sandro Botticelli [Public domain], via Wikimedia Commons