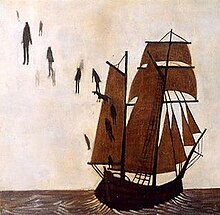 Castaways and Cutouts is the first full-length album by The Decemberists, originally released on May 21, 2002, on Hush Records and reissued on May 6, 2003, on Kill Rock Stars. The album’s title is taken from a lyric of the song “California One/Youth and Beauty Brigade”.
All songs written by Colin Meloy.

Fig. 1: “La Grande Oadalisque” by Jean Auguste Dominique Ingres, an 1814 oil painting on display at the Louvre and a prime example or Orientalism.
Lay your belly under mine
Naked under me, under me
Such a filthy dimming shine [13]
The way you kick and scream [14] Okay, first thing: Whom exactly is Meloy empowering by singing about rape and murder? I feel like this should go without saying, but empowerment via reclamation of historically hurtful themes isn’t really a transitive thing. Could female British folk-revival singers empower themselves by singing about rape? Sure! Can Colin Meloy empower women by singing about rape? No! Well, he can try, but it’ll go over about as well as if I tried to empower African-Americans by tossing around the n-word.
There are a lot of “being”s in that list, because women in Decemberists ballads rarely play an active role in their own stories. They’re usually tabulae rasae; we get no sense of their personal experience or their individuality. They often show up out of nowhere for the express purpose of dying in order to advance the plot of the song. Not one of these stories is told from the woman’s point of view; many of them are sung from the point of view of the woman’s rapist or murderer. (“Leslie Anne Levine” is sung from the point of view of the premature infant’s ghost.) (Really.)

AVC: Has playing larger venues changed your approach to performing?
AVC: You recently became a father. How has having son affected your feelings about being in a successful band?

Lazy lady had a baby girl, and a sweet sound it made
And what do we do with ten baby shoes
A kit bag full of marbles
And a broken billiard cue?
What do we do?