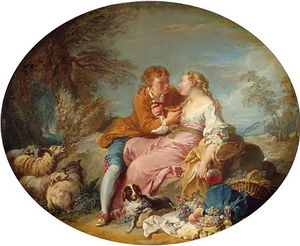 Fragonard’s use of a dark palette, filling the canvas with blacks, reds and golds, imbues The Bolt with heightened drama. The painting is an interior scene, with the main light source apparently just right of the canvas edge, illuminating the central couple and the bolt that gives the work its name. A man, dressed in white shirt and shorts, facing away from the viewer, reaches for this lock with his right hand, using his left arm to sweep a woman, in a yellow dress toward him; she leans her head backward and to her right, toward the viewer and the light. There is, to the left of the woman, a bed with white sheets and a red canopy, shrouded in shadow.
This series was ultimately rejected by the Comtesse du Barry, likely due to the contrast with the architectural setting for which it was intended. Fragonard later installed The Progress of Love in the Villa Maubert in Grasse, adding additional panels, including a fifth, The Abandoned One, that shifted the narrative considerably, transforming the girl from an exemplar to a victim of love.

Girl on a Swing Painting
Swinging above the falls Painting

Now regarded as one of the greatest painters in the Rococo movement, Jean-Honoré Fragonard’s prolific career was characterized by outstanding success in genre paintings of merriment and veiled hedonism. Likewise, the story of The Swing begins with the commission request by Baron Louis-Guillaume Baillet de Saint-Julien, who wanted a portrait of his mistress. The Baron was very clear in his salacious intentions, specifically asking that in the painting his mistress was pushed on a swing by a bishop, while he (the Baron) looked up his mistress’s dress.
While most painters of the time shied away from the task, Fragonard happily undertook the project. Depicting sensual, indulgent scenes was a comfortable specialty he was lauded for as an artist. In the end, however, Fragonard did make one omission from the original request, and exchanged the figure of a bishop with the more acceptable character of a cuckolded husband.

This is a site-wide search, however if you are looking for specific collection pieces, please use the Collection Search feature.
This summer 2019 saw the launch of our ground-breaking conservation and research project focused around the Collection’s eight masterpieces by Jean-Honoré Fragonard.