Parmigianino has distorted nature for his own artistic purposes, creating a typical Mannerist figura serpentinata. Jesus is also extremely large for a baby, and he lies precariously on Mary’s lap as if about to fall at any moment. The Madonna herself is of hardly human proportions—she is almost twice the size of the angels to her right. [4] Her right foot rests on cushions that appear to be only a few inches away from the picture plane, but the foot itself seems to project beyond it, and is thus on “our” side of the canvas, breaking the conventions of a framed picture. [4] Her slender hands and long fingers have also led the Italian medical scientist Vito Franco of the University of Palermo to diagnose that Parmigianino’s model had the genetic disorder Marfan syndrome affecting her connective tissue. [5] [6]
The Madonna with the Long Neck (Italian: Madonna dal collo lungo), also known as Madonna and Child with Angels and St. Jerome, is an Italian Mannerist oil painting by Parmigianino, dating from c. 1535-1540 and depicting Madonna and Child with angels. The painting was begun in 1534 for the funerary chapel of Francesco Tagliaferri [1] in Parma, but remained incomplete on Parmigianino’s death in 1540. Ferdinando de’ Medici, Grand Prince of Tuscany, purchased it in 1698 and it has been on display at the Uffizi since 1948. [2]

Parmigianino studied and admired the grace and poise in Raphael’s art, but he has remodeled the figures from the old master’s work and turned them into almost unearthly creatures: their limbs, ivory marble skin, blithe attitude, all portray a different idea of ideal beauty.
Madonna with the Long Neck

The design of the painting is based on text taken from medieval hymns to the Virgin (herself traditionally understood as an allegorical representation of the Church), which likens her neck to a great ivory column, supporting the Church of God. Thus the exaggerated length of Virgin’s neck is – like the marble pillar or column in the background – a sign of the painting’s religious meaning.
Madonna of the Long Neck is an excellent example of the new style of Mannerism, that followed High Renaissance painting in the early 1530s. High Renaissance art – exemplified by Raphael’s Sistine Madonna (1513-14, Gemaldegalerie Alte Meister Dresden) – emphasized harmony and balance. Parmigianino had no interest in this. So, instead of grouping his angels in equal numbers on both sides of the Madonna and Child, he crammed them all into one side, creating extra movement and opening up the picture more fully. Furthermore, the Madonna’s pose describes a typical Mannerist figura serpentinata. In this way, Parmigianino and other Mannerists sought to demonstrate that the classical solution of perfect harmony is not the only answer. After decades of Renaissance ‘harmony’, the new generation of artists – including Jacopo da Pontormo (1494-1556), Rosso Fiorentino (1494-1540), Agnolo Bronzino (1503-72) and Federico Barocci (1526-1612), as well as the Venetians Jacopo Bassano (1515-92), Tintoretto (1518-94), Paolo Veronese (1528-88) and the Cretan painter known as El Greco (1541-1614) – wanted to create something new and unexpected, even if it distorted classical forms and rhythms. 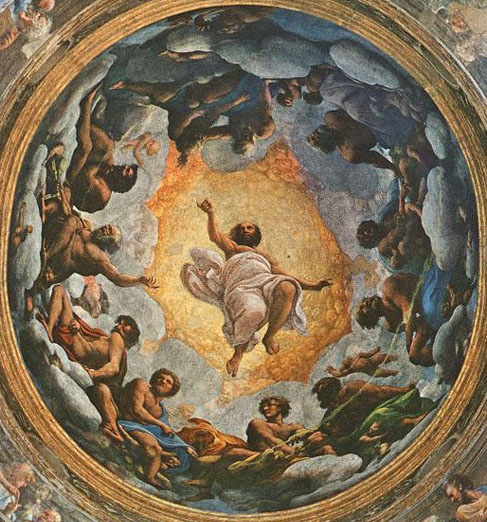 The remainder of Correggio’s most famous works, the dates of few known with certainty, fall into three groups: the great altarpieces (and a few other large religious compositions); exquisite small works of private devotion; and a handful of mythological subjects of a lyrically sensuous character. Many of the altarpieces became so well known that they acquired nicknames. The “Adoration of the Shepherds” (c. 1530; Gemaldegalerie, Dresden, Ger.) is called “Night” (“La Notte”), and the “Madonna of St. Jerome” (Galleria Nazionale, Parma) is popularly known as “Day” (“Il Giorno”).The late altarpieces are generally characterized by an intimate and domestic mood sustained between idealized figures. This intimate and homely poetry also distinguishes the small devotional works, such as “The Madonna of the Basket” or “The Virgin Adoring the Child Jesus” (Uffizi, Florence), while the “Mystic Marriage of St. Catherine” is a visual essay in the mid-16th-century aesthetic of ideal feminine beauty. In these late works Correggio fully exploited the medium of oil painting. He was intrigued with the sensual beauty of paint texture and achieved his most remarkable effects in a series of mythological works, including the “Danae” (Borghese Gallery, Rome), “The Rape of Ganymede,” and “Jupiter and Io” (both in the Kunsthistorisches Museum, Vienna). The sensuous characterof the subject matter is enhanced by the quality of the paint, which seems to have been lightly breathed onto the canvas. These pictures carry the erotic to the limits it can go without becoming offensive or pornographic.
Parmigianino
Myth of Diana and Acteon
ceiling in the Rossa di San Vitale, Fontanellato, c. 1522

Important: A turning edge (5-6mm) is required for manufacturing. The drawings appearing in this zone may be cut off.
Production time: 1-2 business days