parmigianino madonna of the long neck

Name: Madonna With the Long Neck (Madonna dal collo lungo) (1535)
Artist: Parmigianino (Girolamo, Francesco Maria Mazzola) (1503-40)
Medium: Panel picture with oils
Genre: History Painting (religious)
Movement/Style: Mannerism
Location: Uffizi Gallery, Florence
The design of the painting is based on text taken from medieval hymns to the Virgin (herself traditionally understood as an allegorical representation of the Church), which likens her neck to a great ivory column, supporting the Church of God. Thus the exaggerated length of Virgin’s neck is – like the marble pillar or column in the background – a sign of the painting’s religious meaning.

The Madonna and baby Jesus appear randomly distorted upon first glance, but a closer look and understanding of the time meaning can be applied to some of the distortion displayed. For example, the trait that gives this painting its name is the long neck worn by the Madonna. Parmagianino purpousfully elongates her neck in refrence to a popular medeaval hymn in which Mary’s neck is compared to a great ivory tower or column. The columns seen in the background further express this idea and are symbolic of the painting’s religious value. The Madonna is further distorted as she takes on a shape of a diamond as her head and feet appear very tiny and her hips very wide. She almost becomes a landscape for the large baby Jesus that lays across her lap.
Title: Madonna of the Long neck
Artist: Parmagianino
Medium: Oil on Wood
Location: Uffizi (Florence, Italy)
Time: 1535-1540
Dimensions: 85 in x 52 in 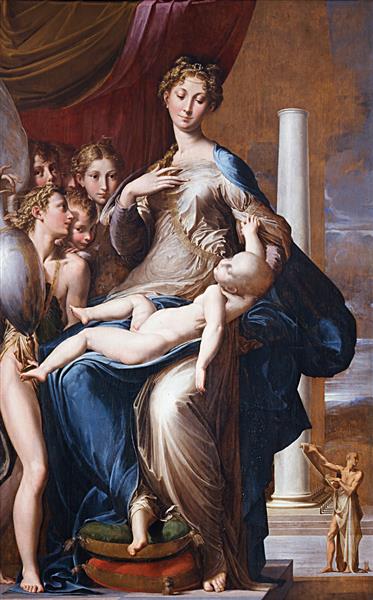 The Madonna with the Long Neck (Italian: Madonna dal collo lungo), also known as Madonna and Child with Angels and St. Jerome, is an Italian Mannerist oil painting by the painter Parmigianino, dating from c. 1535-1540 and depicting Madonna and Child with angels. The painting was begun in 1534 for the funerary chapel of Francesco Tagliaferri in Parma, but remained incomplete on Parmigianino’s death in 1540. Ferdinando de’ Medici, Grand Prince of Tuscany purchased it in 1698 and it has been on display at the Uffizi since 1948.
Following a recent restoration of the painting, the unfinished face of an angel just below the Madonna’s right elbow can be seen more clearly. Also the angel in the middle of the bottom row now looks at the vase held by the angel on his right, in which can be seen the faint image of a cross. Before the restoration this angel looked down at the Christ child. The changes made during the restoration likely reflect the original painting, which must have been altered at some time in its history. The angel who faces the viewer has a resemblance to Parmigianino’s Antea portrait. Oil on Panel – National Gallery, London
In their attempt to step out from the long shadow cast by the masters of the High Renaissance, the Mannerists challenge the idea of compositional harmony and were intent rather on exploring different perspectives and unusual spatial relations within the frame. Here, for instance, the drawing hand swings and flexes through the foreground of the globed composition, making it appear large and domineering, whilst the angelic delicacy of the boy-artist’s face is allowed to recede into a kind of calm power in the mid-ground. Parmigianino’s meticulous eye is evident at this early stage in details like the wood-panelling in the roof, the diamond-hatch leading of the window design, the frost or dust on the pane, and the play of light on the boy’s ring (betraying an early glimmer, perhaps, of his later obsession with gold and alchemy). The entire picture is lit by daylight originating from the window in the back-left, but then reflected from the mirror-surface back onto the boy’s hand and face. In this sense, the painter seems to be lit supernaturally, or from within. Or, equally, the effect is as though he is lit by something beyond the frame, on the spectator’s side of the frame. The boards and panels and doorways of the artist’s home in Parma are visible in the background even as they seem to shy away in the distorted frame (the Renaissance painters, incidentally, had used mirrors as a tool for eradicating distortions), giving them a demur, intimate feel.