The structure is pyramidal, and the vertex coincides with Mary’s head. The statue widens progressively down the drapery of Mary’s dress, to the base, the rock of Golgotha. The figures are quite out of proportion, owing to the difficulty of depicting a fully-grown man cradled full-length in a woman’s lap. Much of Mary’s body is concealed by her monumental drapery, and the relationship of the figures appears quite natural. Michelangelo’s interpretation of the Pietà was far different from those previously created by other artists, as he sculpted a young and beautiful Mary rather than an older woman around 50 years of age. [4]
Christ’s face does not reveal signs of the Passion. Michelangelo did not want his version of the Pietà to represent death, but rather to show the “religious vision of abandonment and a serene face of the Son,” [5] [ better source needed ] thus the representation of the communion between man and God by the sanctification through Christ.

Michelangelo claimed that the block of Carrara marble he used to work on this was the most “perfect” block he ever used, and he would go on to polish and refine this work more than any other statue he created.
An examination of each figure reveals that their proportions are not entirely natural in relation to the other. Although their heads are proportional, the Virgin’s body is larger than Christ’s body. She appears so large that if she stood up, she would likely tower over her son. The reason Michelangelo did this was probably because it was necessary so that the Virgin could support her son on her lap; had her body been smaller, it might have been very difficult or awkward for her to have held an adult male as gracefully as she does. To assist in this matter, Michelangelo has amassed the garments on her lap into a sea of folded drapery to make her look larger. While this drapery serves this practical purpose, it also allowed Michelangelo to display his virtuosity and superb technique when using a drill to cut deeply into the marble. After his work on the marble was complete, the marble looked less like stone and more like actual cloth because of its multiplicity of natural-looking folds, curves, and deep recesses. 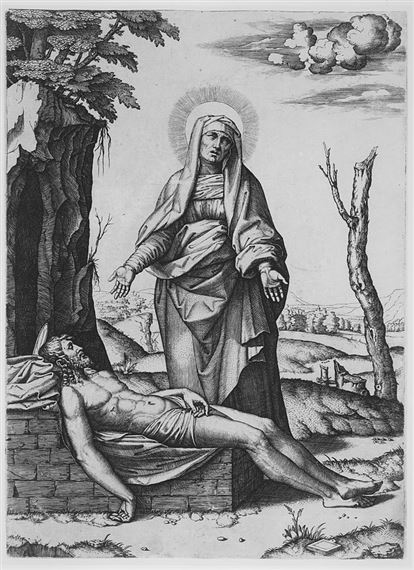 Housed in the Castello Sforza, Michelangelo’s final sculpture seems to call back to those gory German Pietàs which Dr. Wouk highlighted. The artist has begun carving a muscular, idealized Christ, much in the style of his three other depictions of the image. At some point during the process, however, Michelangelo has had a change of heart. The curved arm of the old figure remains, but the sculptor has dug deeper into the marble to begin forming a broken, waifish corpse. It’s perhaps the most human and touching depiction of Christ ever done by Michelangelo, even as it remains unfinished.
The image of Christ’s corpse coming down from the cross forms the penultimate episode of the 14 Stations of the Cross, a series of iconographic motifs charting the day of Jesus’ crucifixion. It has a complex history throughout European orthodox art, as Dr. Wouk explains: “I would say that the Pietà, this piece of iconography, this visual motif of the dead Christ in his mother’s lap, has a very long and gory history in late Medieval German art. We have many surviving examples of really excruciating images of an emaciated body lacerated with wounds, covered with ample red paint indicative of blood, and the distraught figure of Mary with these really heightened emotions, in German wooden-sculptural tradition.” 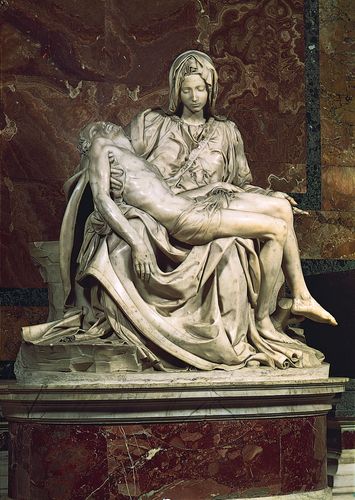 The theme, which has no literary source but grew out of the theme of the lamentation over Christ’s body, first appeared in the early 14th century in Germany. It soon spread to France and enjoyed great popularity in northern Europe in the 14th and 15th centuries. Although the Pietà remained mostly a Franco-German theme, its supreme representation is that completed by Michelangelo in 1499 and housed in St. Peter’s Basilica in Rome. Influenced by the northern style, Michelangelo draped the figure of Christ across Mary’s lap. Through this pyramidal design and the details of his figures, Michelangelo created a scene that displayed at once agony, solemnity, and heroic resignation.
Pietà, as a theme in Christian art, depiction of the Virgin Mary supporting the body of the dead Christ. Some representations of the Pietà include John the Apostle, Mary Magdalene, and sometimes other figures on either side of the Virgin, but the great majority show only Mary and her Son. The Pietà was widely represented in both painting and sculpture, being one of the most poignant visual expressions of popular concern with the emotional aspects of the lives of Christ and the Virgin.

The first declared that the Pietà‘s damage was now a part of its meaning, speaking to the violence of our modern age. Others proposed that the sculpture be repaired, but with visible seams as a reminder of this grave assault. Ultimately, a seamless restoration was chosen, with the goal of making it impossible for observers to know that Toth had even touched Michelangelo’s masterpiece.
Being an exhibition full of Surrealists, Dalí’s stunt was hardly the oddest behavior on display that day. Painter Sheila Legge arrived at the show’s opening carrying a pork chop that quickly went bad in the June heat, and poet Dylan Thomas went around offering visitors teacups of boiled string.