This German style was adapted by French carvers, although with softer and less brutally realistic tones. [6]
The figures are carved in high relief, which can be seen especially in the deep concave folds of the dress around Mary’s legs. [8]

Pietà is one of the three common artistic representations of a sorrowful Virgin Mary, the other two being Mater Dolorosa (Mother of Sorrows) and Stabat Mater (here stands the mother). [1] [2] The other two representations are most commonly found in paintings, rather than sculpture, although combined forms exist. [3]
A pietà (Italian pronunciation: [pjeˈta] ; meaning “pity”, “compassion”) is a subject in Christian art depicting the Virgin Mary cradling the dead body of Jesus, most often found in sculpture. As such, it is a particular form of the Lamentation of Christ, a scene from the Passion of Christ found in cycles of the Life of Christ. When Christ and the Virgin are surrounded by other figures from the New Testament, the subject is strictly called a lamentation in English, although pietà is often used for this as well, and is the normal term in Italian. 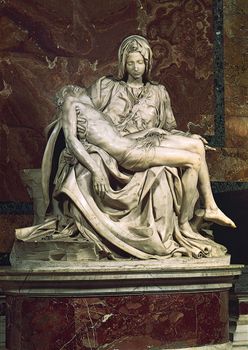 In Christian art, “pieta” – the Italian for “pity” or “mercy” – is a depiction of the dead Christ following the descent from the cross, accompanied either by a sorrowful Virgin/Madonna (sometimes with Saint John), or angels. The image may be a sculpture – most often a marble sculpture or a wood carving – or a painting. The most famous Pieta is the sculpture by Michelangelo, which can be seen in St Peter’s Basilica, Rome.
EVOLUTION OF VISUAL ART
For details of art movements
and styles, see: History of Art.
For chronology, see:
History of Art Timeline.