“The School of Athens” preparatory cartoon
It’s universally agreed that the older gentleman sprawled on the steps is Diogenes. Founder of the Cynic philosophy, he was a controversial figure in his day, living a simple life and criticizing cultural conventions. To see the School of Athens painting today you must enter into the Vatican Museums by taking a tour, standing in line or pre-booking your skip the line tickets. You will find the painting in the so-called Raphael Rooms (Stanze di Raffaello) on your way to the Sistine Chapel. The museums are a one-way system so you will have to go to the Raphael Rooms to exit the museums.
However, in the original cartoon, or preparatory work, Raphael had not planned to put this figure in. Giorgio Vasari says that while Michelangelo was painting the ceiling of the Sistine Chapel, Bramante allowed Raphael a peek which was against Michelangelo’s rules. However, Raphael was so impressed that he sketched in this figure of Heraclitus with red chalk after the School of Athens was officially completed and very quickly added this figure as a tribute to Michelangelo. Today when you see this figure it is quite noticeable that it is out of place. If you would like to compare it to the original plans, the cartoon for the School of Athens can be seen in the Pinacoteca Ambrosiana in Milan today. 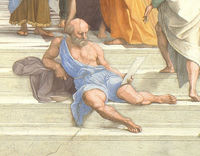 There is a great deal of conjecture concerning the solitary Heraclitus figure. Heraclitus was the only figure in the whole School of Athens who was absent from Raphael’s preliminary drawing of the painting. Furthermore, technical examination of the fresco confirms that Heraclitus was painted in later, on an area of fresh plaster put on after the adjacent figures were completed. At the time of painting the School of Athens, Michelangelo was working on the Sistine Chapel and despite his efforts to shroud his work in total secrecy, we know Raphael was able to sneak in and have a look. Was this the inspiration for Heraclitus, who not only looks like Michelangelo, with its sculptural solidity, but looks like it was painted by Michelangelo?
Unlike some of his latter frescoes, The Stanza della Segnatura (1508-11) was decorated almost entirely by Raphael himself.

The other figures shown in the fresco representing other significant Greek philosophers are not as clearly identifiable. While some are more recognizable than others, some of the figures may represent philosophers where no historical image exists. Raphael used iconography to represent those philosophers with no known visual image such as Epicurus. While Plato and Aristotle serve as the central figures of the fresco, the other philosophers depicted lived at various times and were not necessarily their contemporaries. Many of them lived before Plato and Aristotle and barely a third were Athenians. However, the compilation of famous Greek philosophers followed the intended theme of the fresco to seek knowledge through philosophy.
School of Athens refers to a famous fresco painted by Raphael in the Apostolic Palace in Vatican City. The fresco was painted between 1510 and 1511 and is one of four frescoes painted by Raphael in the rooms now known as the Stanze di Raffaello. School of Athens was the second fresco completed in the room and depicts Raphael”s interpretation of philosophy as a branch of knowledge. Showing a gathering of Greek philosophers engaged in various activities, the fresco is considered a prime example of High Renaissance art and considered Raphael”s masterpiece.