If in the Dispute, the central axis contains all the primary components of the meaning, in its counterpart on the opposite wall – The School of Athens – the emphasis is on a horizontal reading, and the main figures, located on the top of the short stairs, are strung out like an animated frieze. Such a distribution is related to the fact that in this fresco the stress is on earthly zones rather than on otherworldly ones so characteristic of its analogue. In the case of the Disputa, the golden tonalities reflect theological and spiritual values i n connection with the miraculous nature of the Eucharist; these are in contrast to the clear blues and whites and the crisp, charged atmosphere that characterizes The School of Athens. This is a realm where the power of philosophy and reason, as opposed to faith, seems to dominate.
The School of Athens is a depiction of philosophy. The scene takes place in classical times, as both the architecture and the garments indicate. Figures representing each subject that must be mastered in order to hold a true philosophic debate – astronomy, geometry, arithmetic, and solid geometry – are depicted in concrete form. The arbiters of this rule, the main figures, Plato and Aristotle, are shown in the centre, engaged in such a dialogue.

The popular idea that the rhetorical gestures of Plato and Aristotle are kinds of pointing (to the heavens, and down to earth) is very likely. However, Plato’s Timaeus – which is the book Raphael places in his hand – was a sophisticated treatment of space, time, and change, including the Earth, which guided mathematical sciences for over a millennium. Aristotle, with his four-elements theory, held that all change on Earth was owing to motions of the heavens. In the painting Aristotle carries his Ethics, which he denied could be reduced to a mathematical science. It is not certain how much the young Raphael knew of ancient philosophy, what guidance he might have had from people such as Bramante and whether a detailed program was dictated by his sponsor, Pope Julius II.
The main arch, above the characters, shows a meander (also known as a Greek fret or Greek key design), a design using continuous lines that repeat in a “series of rectangular bends” which originated on pottery of the Greek Geometric period and then become widely used in ancient Greek architectural friezes. [12]

In particular, Raphael’s fresco The School of Athens has come to symbolize the marriage of art, philosophy, and science that was a hallmark of the Italian Renaissance. Painted between 1509 and 1511, it is located in the first of the four rooms designed by Raphael, the Stanza della Segnatura.
Raphael was in Florence when he received word that Pope Julius II, the same man who asked Michelangelo to paint the Sistine Ceiling, asked him to decorate apartments on the second floor of the Vatican Palace. He was hoping to outshine the Early Renaissance paintings his predecessor, Pope Alexander VI, had done in the Borgia Apartments, which sat directly below. It could be seen as a bold choice, as a young Raphael had never executed fresco works as complex as the commission would require. At that point, he’d mainly been known for his small portraits and religious paintings on wood, in addition to a few altarpieces. Some believe that his friend Bramante, who was the architect of St. Peter’s, recommended him for the job. They’d both grown up in Urbino and knew each other well. 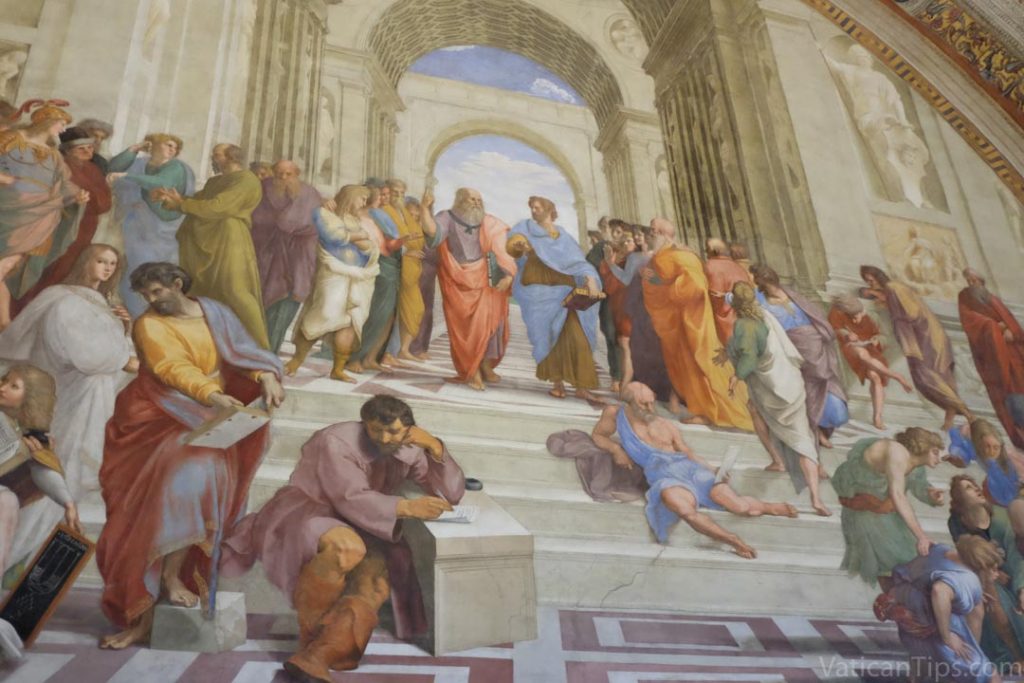 Raphael modeled a lot of these figures on actual people that he knew or met, some of whom are major figures in art history today. Plato, for example, has the clear likeness of Leonardo Da Vinci who Raphael knew. In fact, Raphael may even have been one of the first people to see Da Vinci’s Mona Lisa.
The School of Athens painting was begun in 1509 and completed in 1511. However, Raphael had a large team of workers and assistance to work alongside him to paint at this pace. In the center of this theological painting are two of history’s most important philosophers, on the left is Plato and on the right is Aristotle.

This fresco – a masterpiece of disegno – represents natural Truth, acquired through reason. Under the arched vault of an immense Basilica with lacunar ceiling and pilasters, (inspired by Constantine’s in the Roman Forum), decorated with statues of Apollo and Minerva, a crowd of philosophers and wise men of the past, along with High Renaissance artists and patrons, argue heatedly among themselves or mediate in silence. The extraordinarily deep linear perspective creates an incredible illusion of depth. In the centre we see Plato (long white beard and the features of Leonardo da Vinci), text of the Timaeus in hand, the other hand pointing to heaven, the “seat of all ideas”. At his side is Aristotle, in turn holding his Ethics and pointing to the earth. The two philosophers and their gesturing make a point which is the core of the philosophy of Marsilio Ficino: Aristotle’s gesture symbolizes the positive spirit; the vertical gesture of Plato alludes to a superior quality, the contemplation of ideas.
Further to the right, calmly reclining on the stairs, is Diogenes, the oject of the remonstrations by the disciples of the Academy. In the foreground, to the right of Aristotle, Raphael placed the High Renaissance architect Donato Bramante (1444-1514) in the person of Euclid, who is pictured bending over a table and demonstrating a theorem with the aid of a compass. Bramante, the architectural adviser to Julius II, and a distant relative of Raphael’s from Urbino, was responsible for Raphael’s summons to Rome, and the younger man reciprocates by signing his name in the gold border of Bramante’s tunic. Over to the right, identified by the crown he wears, is the geographer Ptolemy, holding the globe of the earth. Facing him is the atronomer Zoroaster, holding the globe of the sky. The young man at their side and facing the viewer is supposedly Raphael himself in the company of Sodoma (white robe), the artist who preceded Raphael in the decoration of the ceiling of the Signature room.