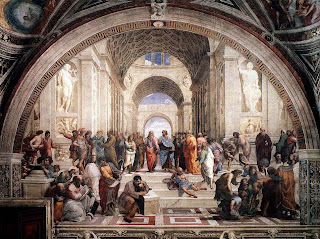 Raphael was an Italian Renaissance artists that painted his famous School of Athens in 1510. This piece of work is the epitome of a great painting for composition, among other techniques. He shows depth in the picture by creating a realistic use of foreground, middle ground, and background. There are various diagonals used that all lead the viewer’s eyes towards the center of the painting. Color does play a role in the painting through the assigned colors of the people’s clothing. According to the colored fabrics, one can sense power to each individual. For example, Plato, who is placed as the center of attention, is draped in red, a color often used for power and influence for painters.
Raphael’s perspective creates an excellent three dimensionality in the forms. While viewing this painting, the viewer feels as if he/she is passing by a real window and looking in. Some objects, such as the outer architectural structure, appears close and other objects, people, appear more distant. Unlike two-dimensional pictures, Raphael reaches beyond artists of his time by making the viewer feel like they are truly in the painting. Raphael uses single point, or linear perspective, for School of Athens. The space of the painting does appear logical because Raphael did an excellent job of using the vanishing point along the imaginary horizon line to create a sense of real space.

School of Athens refers to a famous fresco painted by Raphael in the Apostolic Palace in Vatican City. The fresco was painted between 1510 and 1511 and is one of four frescoes painted by Raphael in the rooms now known as the Stanze di Raffaello. School of Athens was the second fresco completed in the room and depicts Raphael”s interpretation of philosophy as a branch of knowledge. Showing a gathering of Greek philosophers engaged in various activities, the fresco is considered a prime example of High Renaissance art and considered Raphael”s masterpiece.
The other figures shown in the fresco representing other significant Greek philosophers are not as clearly identifiable. While some are more recognizable than others, some of the figures may represent philosophers where no historical image exists. Raphael used iconography to represent those philosophers with no known visual image such as Epicurus. While Plato and Aristotle serve as the central figures of the fresco, the other philosophers depicted lived at various times and were not necessarily their contemporaries. Many of them lived before Plato and Aristotle and barely a third were Athenians. However, the compilation of famous Greek philosophers followed the intended theme of the fresco to seek knowledge through philosophy.

It’s universally agreed that the older gentleman sprawled on the steps is Diogenes. Founder of the Cynic philosophy, he was a controversial figure in his day, living a simple life and criticizing cultural conventions.
In the foreground, Pythagoras sits with a book and an inkwell, also surrounded by students. Though Pythagoras is well known for his mathematical and scientific discoveries, he also firmly believed in metempsychosis. This philosophy states that every soul is immortal, and upon death, moves to a new physical body. In this light, it makes sense that he would be placed on Plato’s side of the fresco.

On the left, cloaked in an olive mantle, is Socrates, arguing in a group that includes Chrysippus, Xenophon, Aeschines and Alcibiades. Facing the venerable Venetian scientist Zeno, is Epicurus, crowned with grape leaves, presumably defending the principle of hedonism. Attentively followed by his pupils (including the turbanned Averroes) Pythagoras teaches the diatesseron from a book. In strong contrast in front of him is Xenocrates (others say Parmenides). In the foreground, head resting on his arm, the mournful Heracleitus (with the features of Michelangelo). The absence of this figure in the original cartoon (now in Milan’s Ambrosian Library) and its obvious Michelangelo style (it is modelled on the Sybils and Ignudi of the Sistine ceiling), leads us to believe that Raphael added this figure in 1511 when, after completing the room, he saw the first half of the Sistine Chapel Ceiling frescoes. In tribute to his great rival, Raphael portrayed Michelangelo in the guise of the philosopher from Ephesus. The child at the side of Epicurus, clearly indifferent to the speculations of the thinkers, seems to be Federico Gonzaga (1500-40), later Federico II of Mantua of the famous Gonzaga family of Renaissance patrons and collectors. The passer-by in white translucent toga and da Vinci smile, is supposedly Francesco Maria Della Rovere (1490-1538), nephew of Julius II and later Duke of Urbino.
Further to the right, calmly reclining on the stairs, is Diogenes, the oject of the remonstrations by the disciples of the Academy. In the foreground, to the right of Aristotle, Raphael placed the High Renaissance architect Donato Bramante (1444-1514) in the person of Euclid, who is pictured bending over a table and demonstrating a theorem with the aid of a compass. Bramante, the architectural adviser to Julius II, and a distant relative of Raphael’s from Urbino, was responsible for Raphael’s summons to Rome, and the younger man reciprocates by signing his name in the gold border of Bramante’s tunic. Over to the right, identified by the crown he wears, is the geographer Ptolemy, holding the globe of the earth. Facing him is the atronomer Zoroaster, holding the globe of the sky. The young man at their side and facing the viewer is supposedly Raphael himself in the company of Sodoma (white robe), the artist who preceded Raphael in the decoration of the ceiling of the Signature room. 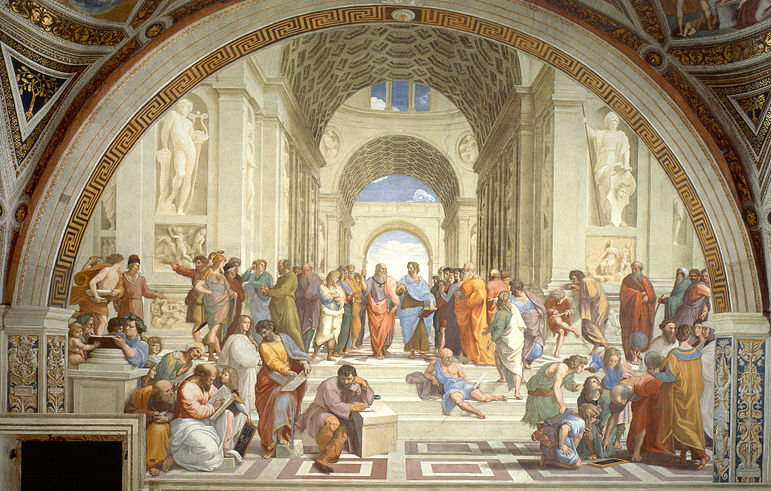 Raphael’s masterpiece, The School of Athens, is of particular interest. This fresco, in the Apostolic Palace in the Vatican, shows all the major classical Greek philosophers and mathematicians, engaging in dialogue or immersed in contemplation. The picture gives a brilliant sense of space through the use of perspective. The setting is an imposing hall with lofty arches, ornate ceilings and mosaic floors, all rendered in proper spatial relationship.
That’s Maths in the Irish Times this week ( TM024: search for “thatsmaths” ) deals with perspective in art and its mathematical expression as projective geometry.