Donato di Niccolò di Betto Bardi (c. 1386 – 13 December 1466), better known as Donatello ( English: / ˌ d ɒ n ə ˈ t ɛ l oʊ / [1] Italian: [donaˈtɛllo] ), was an Italian sculptor of the Renaissance. Born in Florence, he studied classical sculpture and used this to develop a complete Renaissance style in sculpture, whose periods in Rome, Padua and Siena introduced to other parts of Italy a long and productive career. He worked with stone, bronze, wood, clay, stucco and wax, and had several assistants, with four perhaps being a typical number. Though his best-known works were mostly statues in the round, he developed a new, very shallow, type of bas-relief for small works, and a good deal of his output was larger architectural reliefs.
When Cosimo was exiled from Florence, Donatello went to Rome, remaining until 1433. The two works that testify to his presence in this city, the Tomb of Giovanni Crivelli at Santa Maria in Aracoeli, and the Ciborium at St. Peter’s Basilica, bear a strong stamp of classical influence.

Donatello was commissioned by the swordmakers’ and armorers’ guild to carve this sculpture of their patron saint, St. George, for a niche on the exterior of the church of Orsanmichele in Florence. The work is a life-sized depiction of the saint standing atop a marble panel which is carved to illustrate the famous mythical moment when George slayed the dragon. Although the work was meant to reflect the Florentine spirit of holding strong against all adversaries, Donatello’s meticulous rendering of the emotionality of the face also betrays a distinct vulnerability and softness. This expertise in portraying emotion, as is also seen in his equestrian statue of condottiero Erasmo da Narni, was a signature technique of the artist toward humanizing subjects that would traditionally be presented in a more idealized fashion.
Niccolo da Uzzano was an important figure in Florentine politics in the early decades of the 15th century, who acted as a respected intermediary figure between the city’s powerful rival families. Donatello produced the bust (although its authorship is sometimes contested) soon after Uzzano’s death in 1433. It was the first half-bust of a private citizen produced since antiquity. 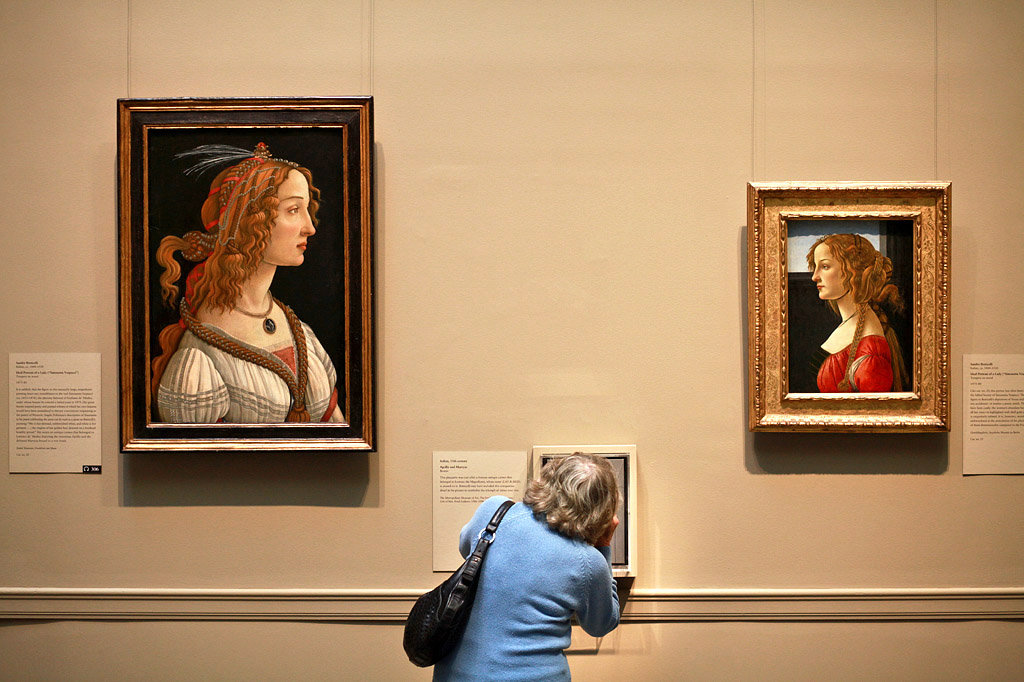 It is one of the most charming pictures in “The Renaissance Portrait from Donatello to Bellini,” a magisterial, intensely thought-provoking display of about 160 works by the most celebrated masters of 15th-century Italian painting and sculpture at the Metropolitan Museum of Art. It also has a remarkable back story. In the year it was painted, the boy’s father, Francesco Gonzaga, ruler of Mantua, was captured by his Venetian enemies. Pope Julius II brokered his release, which was conditional on the young Federigo being sent to Rome as a hostage to ensure that Francesco would not wreak vengeance on Venice.
You will, however, find much personal life in drawings, including pieces made with exceptional skill by Fra Angelico, Luca Signorelli and Pisanello. The image of an unknown man, weathered and middle-aged and drawn in charcoal by Mantegna around 1470-73, is as striking for the reflective sadness that seems to infuse every line in his craggy face as for the artist’s extraordinarily sensitive yet firm draftsmanship.

Donatello continued to explore the possibilities of the new technique in his marble reliefs of the 1420s and early 1430s. The most highly developed of these are The Ascension, with Christ Giving the Keys to St Peter, which is so delicately carved that its full beauty can be seen only in a strongly raking light; and the Feast of Herod (1433-35), with its perspective background. The large stucco roundels with scenes from the life of St John the Evangelist (about 1434-37), below the dome of the old sacristy of San Lorenzo, Florence, show the same technique but with colour added for better legibility at a distance.
The full power of Donatello first appeared in two marble statues, St Mark and St George (both completed c. 1415), for niches on the exterior of Or San Michele, the church of Florentine guilds (St George has been replaced by a copy; the original is now in the Bargello). Here, for the first time since classical antiquity and in striking contrast to medieval art, the human body is rendered as a self-activating, functional organism, and the human personality is shown with a confidence in its own worth. The same qualities came increasingly to the fore in a series of five prophet statues that Donatello did beginning in 1416 for the niches of the campanile, the bell tower of the cathedral (all these figures, together with others by lesser masters, were later removed to the Museo dell’Opera del Duomo). The statues were of a beardless and a bearded prophet, as well as a group of Abraham and Isaac (1416-21) for the eastern niches; the so-called Zuccone (“pumpkin,” because of its bald head); and Jeremiah for the western niches.
The Zuccone is deservedly famous as the finest of the campanile statues and one of the artist’s masterpieces. In both the Zuccone and the Jeremiah (1427-35), their whole appearance, especially highly individual features inspired by ancient Roman portrait busts, suggests classical orators of singular expressive force. The statues are so different from the traditional images of Old Testament prophets that by the end of the 15th century they could be mistaken for portrait statues.