Starry, starry night.
Paint your palette blue and grey,
Look out on a summer’s day,

For they could not love you,
This is Van Gogh’s tragic Death. Even though he loved painting, his paintings could never love him back.
But still your love was true.
And when no hope was left in sight
On that starry, starry night,
You took your life, as lovers often do.
Van Gogh attempted suicide by shooting himself in the chest, which ultimately led to his death two days later. But I could have told you, Vincent,
This world was never meant for one
As beautiful as you.

“In the autumn of 1970 I had a job singing in the school system, playing my guitar in classrooms. I was sitting on the veranda one morning, reading a biography of Van Gogh, and suddenly I knew I had to write a song arguing that he wasn’t crazy. He had an illness and so did his brother Theo. This makes it different, in my mind, to the garden variety of ‘crazy’ – because he was rejected by a woman [as was commonly thought]. So I sat down with a print of Starry Night and wrote the lyrics out on a paper bag.” [5]

The song was a particular favorite of the rapper and actor Tupac Shakur, and was played to him in the hospital just before he died. [8] 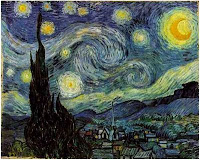 Now I understand what you tried to say to me,
How you suffered for your sanity,
How you tried to set them free.
They would not listen, they did not know how.
Perhaps they’ll listen now.
Van Gogh’s predominant use of yellows has always been a point of intrigue, but he didn’t use it because he liked it, and his use of it had nothing to do with any metaphorical color-related emotions. There are many medical theories as to why the artist used this color so often. One theory suggests that Van Gogh’s affinity for drinking absinthe might have affected his vision. Absinthe is an alcoholic beverage that contains the neurotoxin ‘thujone’; high doses of thujone have been reported to cause xanthopsia, which is a condition that causes the person to see objects in yellow (although recent studies have shown this cannot be possible before the person becomes unconscious from the amount of alcohol consumed to reach this point). Another theory speculates that his physician, Dr. Gachet, had prescribed him digitalis as a treatment for epilepsy. The evidence for this is found in one of the portraits of Dr. Gachet painted by Van Gogh, in which is depicted the stems of Common Foxglove from which the drug is derived. A side-effect of digitalis treatment was the yellow appearance of everyday objects surrounded by a lighter halo, which appear in many of Van Gogh’s later paintings. It has also been supposed that Van Gogh may have suffered either lead poisoning, as this was the base of his paints, which causes swelling of the retina also possibly resulting in the appearance of a halo.

The lyrics refer to some of Van Gogh’s paintings, of which Starry Night is probably the most famous. Instantly recognizable because of its unique style Starry Night was painted while Vincent was hospitalized in Saint-Rémy and his behaviour was very unpredictable, due to the severity of his attacks. Unlike most of Van Gogh’s works, Starry Night was painted from memory and not outdoors as was Vincent’s preference (“Look out on a summer’s day.”)
When he first entered the asylum, he painted mainly from his room or the courtyard garden, but later he could go farther.However, he was not allowed to go outside at night, and had to paint night scenes such as this from memory.
Now I understand
What you tried to say to me
And how you suffered for your sanity
And how you tried to set them free
They would not listen, they did not know how
Perhaps they’ll listen now

In the poem Don McLean uses the pronoun ‘they’ at the beginning there are a number of different possibilities of what is meant by they; society, Vincent’s family, Vincent’s troubles, Vincent’s ‘demons’. But by the end we can tell that the ‘they’ is society.
Throughout the song Don McLean uses positive connotation and then straight after uses negative connotation. This is to show how even on the happiest of days, Vincent felt sadness and sorrow.