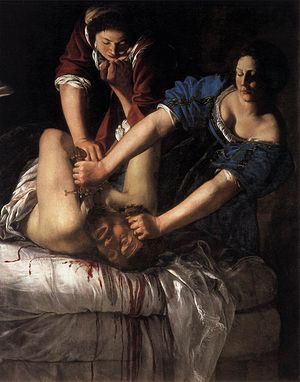 Little is known of the painting’s early history. There is no information as of yet on the patron of this artwork. Its location was unknown until documented in the collection of Signora Saveria de Simone in Naples in 1827. [8] At some point in the painting’s history, the left and top parts of the painting were cut off, leaving a curtailed version of the original painting. [2]
Caravaggio’s Judith Beheading Holofernes is believed to be the main source of this work, and his influence shows in the naturalism and violence Gentileschi brings to her canvas.

The account of the beheading of Holofernes by Judith is given in the deuterocanonical Book of Judith, and is the subject of many paintings and sculptures from the Renaissance and Baroque periods. In the story, Judith, a beautiful widow, is able to enter the tent of Holofernes because of his desire for her. Holofernes was an Assyrian general who was about to destroy Judith’s home, the city of Bethulia. Overcome with drink, he passes out and is decapitated by Judith; his head is taken away in a basket (often depicted as being carried by an elderly female servant).
While many of the above paintings resulted from private patronage, important paintings and cycles were made also by church commission and were made to promote a new allegorical reading of the story—that Judith defeats Protestant heresy. This is the period of the Counter-Reformation, and many images (including a fresco cycle in the Lateran Palace commissioned by Pope Sixtus V and designed by Giovanni Guerra and Cesare Nebbia) “proclaim her rhetorical appropriation by the Catholic or Counter-Reformation Church against the ‘heresies’ of Protestantism. Judith saved her people by vanquishing an adversary she described as not just one heathen but ‘all unbelievers’ (Jdt 13:27); she thus stood as an ideal agent of anti-heretical propaganda.” [10]

Artemisia Gentileschi’s Judith famously leans into the act, beheading with a thirst for vengeance. Her first version was painted in the year Caravaggio, the artist who both influenced and overshadowed her, died. Its determined sense of self-actualization may stem from this. Certainly it is imbued with her struggles and successes in defining herself as a woman artist in the Late Renaissance. A later version, begun in 1614, coalesces within the scene the vengeful catharsis of Artemisia’s own victory over her rapist. Agostino Tassi was tried, convicted, and banished. Artemisia was tortured with thumbscrews to verify her testimony. She prevailed.
Klimt’s Judith and the Head of Holofernes (1901) shows Judith hypersexualized, but not at all ‘objectified.’ She stands head-on to the painting’s frame, seemingly entirely in control of how much of her figure is and isn’t visible. She is not being depicted — she’s revealing herself to you on her own terms. Of course, this ‘strong woman’ ideal is potentially problematic in its own ways. But Klimt’s picture has this overarching sense: the kaleidoscopic redefinition of art and human beings, socially and sexually, as the world crested into the Modern. This heavily influenced Franz Stuck’s 1928 version.