Graham Reynolds, ‘The Later Paintings and Drawings of John Constable’, New Haven, London 1984, pp. 67-70, pls. 213-215.
Constable made a scientific study of cloud formations; he was determined to represent them accurately, and at the same time he saw that clouds could best express the mood of a landscape. ‘It will be difficult to name a class of landscape in which the sky is not the key note, the standard of scale and the chief organ of sentiment’.

It has been suggested that the reason for the wagon stopping at the ford was to allow the river water to cool the horses’ legs and to soak the wheels. In hot dry weather, the wooden wheels would shrink away from their metal rims. Wetting the wheels reduced the shrinkage and kept the outer metal band in place. [10]
Sold at the exhibition with three other Constables to the dealer John Arrowsmith, The Hay Wain was brought back to England by another dealer, D. T. White; he sold it to a Mr. Young who resided in Ryde on the Isle of Wight. It was there that the painting came to the attention of the collector Henry Vaughan and the painter Charles Robert Leslie. [6] On the death of his friend Mr. Young, Vaughan bought the painting from the former’s estate; in 1886 he presented it to the National Gallery in London, where it still hangs today. [7] In his will Vaughan bequeathed the full-scale oil sketch for The Hay Wain, made with a palette knife, to the South Kensington Museum (now the Victoria and Albert Museum). [8]

Constable himself did not call this picture The Hay Wain – it was a nickname given to it by his friend Archdeacon Fisher. When it was sent to the Royal Academy in 1821 with its given title ’ Landscape: Noon ‘, it was greeted favourably by reviewers. The Examiner declared that it ’approaches nearer to the actual look of rural nature than any modern landscape whatever‘. However, it did not sell. Constable was probably unaware at the time that two French visitors to England – the artist Géricault and the writer Nodier – had seen his painting in the Royal Academy. According to Delacroix, Géricault returned to France ’quite stunned‘ by Constable’s picture. Nodier suggested that French artists should similarly look to nature rather than relying on journeys to Rome for inspiration (by this he meant emulating the classicising landscapes, painted by artists such as Claude).
This is the third of the large landscapes set around the River Stour that Constable exhibited at the Royal Academy between 1819 and 1825. The Hay Wain was shown in 1821, the year after Stratford Mill . His determination to capture the rural Suffolk landscape of his boyhood in these monumental paintings must in part have been due to a sense that this way of life was changing due to rapid industrialisation – the factories, steam power and locomotives that appear in works by his contemporaries, such as Turner, are absent from Constable’s paintings.

Method:
Although Constable is famous for being one of the first landscape painters to create canvases purely based on nature, he did not paint The Hay Wain on site. Instead he created several sketches in the summer of 1821 and produced the finished oil version in his London studio in the winter of the same year.
It may be that Constable did not paint images of these problems because he did not want to draw attention away from the natural landscape itself. In The Hay Wain the workers happily fit in with nature and live in harmony with the area. 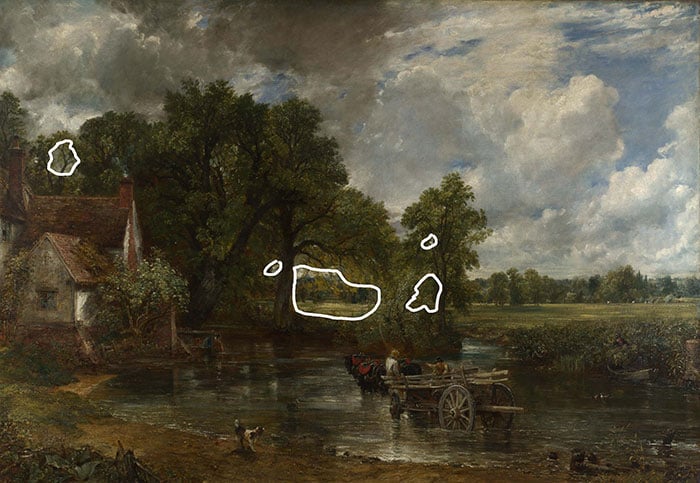 Tip: In painting, there are often two ways to achieve the same result, especially when you are dealing with positive and negative space. Say you are painting a tree in the landscape, much like the trees in this painting. One approach would be to paint the blue sky then paint the tree over the top (the default approach for most artists). The other approach would be to roughly paint the tree first, then use the sky (the negative space) to carve away and refine the tree.
For the trees and leaves, Constable appears to have painted a dark foundation, the scumbled relatively light green and yellow tones over the top. The end result is a dynamic surface of color and texture, mimicking what you would see in nature. The use of thin paint for the darks and thick paint for the lights is also a common theme throughout the whole painting.