At a first sight, the painting impresses through the strongly saturated, yet light colors of the sunset under which the scene develops. The composition of the painting features a great balance between the lines, the colors and the dark areas.
The period of the Romantic movement was a time in arts history that proposed people another way of approaching life than the one they had and of their everyday philosophy, pushing to put forward feelings, dreaming and emotions. 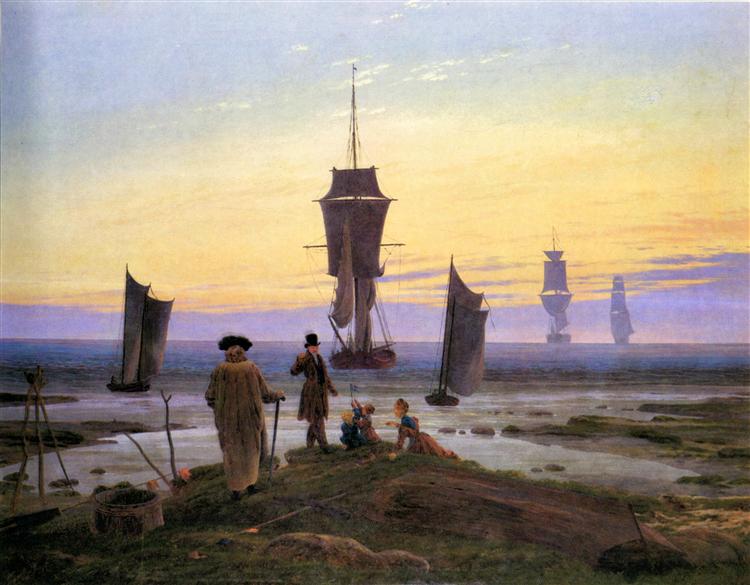 The group forms a semicircle: the children are on its farthest point; to their left and right are a younger man and the young woman. On the extreme left an older man stands looking straight ahead, outside the circle. The women and children are dressed for summer, while the old man wears a coat and a fur hat. The bow of the big ship in the middle is exactly aligned with the two children.
These five figures correspond to the five ships visible in the harbour beyond. The three groupings of figures (one aged man, two adults, and two children) echo the positioning of the ships at various distances from the shore as allegorical of the stages of life, and closeness to death. The central ship is thought to represent the mother, while further inshore, two small boats—references to the two children—have only just begun their voyage and still remain in shallow, clear water. To the horizon, the farthest ship disappears into the setting horizon, symbolizing the aged man’s voyage from this life into the unknown.

Caspar David Friedrich (1774-1840), Chalk Cliffs on Rügen (after 1818), oil on canvas, 90.5 × 71 cm, Museum Oskar Reinhart am Stadtgarten, Winterthur, Switzerland. Wikimedia Commons.
I do not think that this painting attempts to depict, directly or by allegory, any stages of life, nor its figures departing on any journey of life, as those are inconsistent with the painting itself. It does clearly show some narrative involving Friedrich and his family, but without much deeper insight into their life at the time, or an explanation by Friedrich himself, its story will remain enigmatic.

Friedrich’s contemporaries said that the melancholy in his art could be attributed to these tragic childhood events. However I am not so sure that he was a manic depressive as there are many reports that stated he at times had a great sense of humour. This was borne out by the famous German doctor, natural scientist and writer Gotthilf Heinrich von Schubert, who knew the artist and in his autobiography, wrote of Friedrich:
I read the other day that life expectancy for men in the UK is somewhere between 75 and 80 years of age which is some ten years higher than it was in the 1970’s and of course what were once killer diseases are now more often or not, treatable. So why worry about dying if you are still young?

At the age of 24, after an academic training in Copenhagen, drew it the young artists to Dresden. In the Elbe a crossroads formed around him, and other painters and poets such as Tieck and Schlegel to the center of the early Romantic period. The characteristic of the Romance is the mutual impact of poetry and painting. Friedrich’s landscapes are visually mirror the feelings and seek to express what the poetry with words. “Internally, the mysterious path leads. In us, or nowhere, eternity with its worlds, the past and future.” So said the poet Novalis expressed representative of the early Romantics.
The Landscapes takes in his work a prominent position. Friedrich undertook with friends long hikes through the mountains and along the coast. He experienced man in his smallness compared with the immense power of nature. The solitary figures look longingly in vast landscapes with distant horizon. Consult often the viewer back on, so that this can empathize with them. Using symbolic metaphor, the moon as the universe and tree stumps as an indication of transience, he produced contemplative romantic feelings and religious sentiments. With its natural moods Friedrich wanted to gain insight into the human soul.