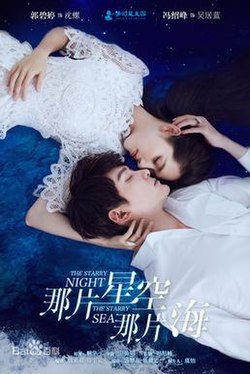 Shen Luo is an ordinary girl who moves from the busy city life to a small cottage in the island. She meets Wu Julan, a man with a mysterious background. Julan is actually a merman, a mystical creature only spoke of in legends. Using his special powers and astute intelligence, he helps Shen Luo overcome many obstacles and they eventually fall in love; however, trouble arises when the spiritual pearl which Wu Julan had lost a hundred over years ago is found to be inside Shen Luo’s body, and removing it would cause her death. [3]
A second season set in Tang Dynasty, titled The Starry Night, The Starry Sea 2 (Chinese: 那片星空那片海2 ), aired on Hunan TV from 2 October to 31 October 2017. [2] 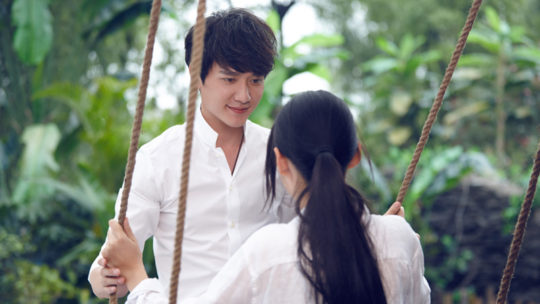 “The Starry Night, The Starry Sea” stars Bea Hayden as Shen Luo, who is tired of the city life and decides to move back to her small island hometown to start a new life. Once she’s back in town, she encounters Wu Ju Lan (Feng Shao Feng), a merman who is in search of his spiritual pearl, which was stolen due to the betrayal of his best friend. The pearl is needed to keep him alive and he will die in three months if it is not found. Wu Ju Lan isn’t the only one looking for the pearl; An Zuo (Sunny Wang) from the Black Wizards organization also wants it. Wu Ju Lan ends up befriending Shen Luo and moves into her home while continuing to search for his pearl.
This drama doesn’t skimp on the romance department. If you’re anything like me, I practically live for the romantic moments when watching dramas. The romance coupled by the breathtaking scenery in the drama is just icing on the cake. Bea Hayden and Feng Shao Feng have fantastic chemistry, and it shows through their loving and tender gazes. One of my favorite romantic moments was from episode 10, when Wu Ju Lan explained to Shen Luo that seashells were once symbols of nobility, but now a lot of people treat them as tokens of love. He then takes a seashell and places it in her hand. He indirectly confesses that he’s in love with her!

When Ju Lan meets Shen Luo, how will their lives change in unexpected ways?
Shen Luo (Bea Hayden) is having work troubles, so she moves from the big city back to a small island cottage, where she spent her childhood living with her grandfather. When Shen Luo learns that her grandfather has been diagnosed with cancer, she decides to stay to take care of him.