“A master of the domestic scene, the pastoral landscape and tongue-in-cheek eroticism of the boudoir painting, Fragonard had his share of admirers and wielded a strong influence over future masters of the art world.”

On the left: Fragonard’s original painting, “The Swing.” On the right: concept art for Disney’s “Tangled” (2010). 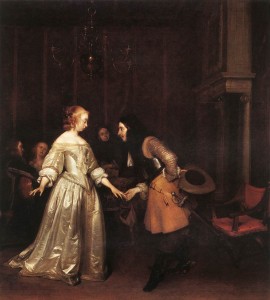 Jean-Honoré Fragonard, The Swing, 1766
In Fragonard’s The Swing, a bishop swings an elegantly dressed young lady, the sweetheart of the young man in the corner (who is the painting’s patron). She boldly and flirtatiously kicks off her shoe. The young man in the lower left corner is in a strategic position to admire her while she is high up on a swing. The little statue of Cupid holds his finger to his lips. The whole scene takes place in the setting of a bower in a park in beautiful and soft pastel colors. This painting epitomizes the Rococo style, with is pastel colors, sensuality, and its frills.

M. Gustave (Ralph Fiennes) and Zero (Tony Revolori) standing in front of Klimt’s “Birch Forest I” in Wes Anderson’s movie “The Grand Budapest Hotel”.
Then there is the moment when Anna jumps in front of a painting of a woman on a swing and mimics her position. This painting is unmistakably Jean-Honoré Fragonard’s The Swing. Apparently this was done on purpose as the painting was the inspiration for the feel of the movie Tangled.