Wanderer above the Sea of Fog (German: Der Wanderer über dem Nebelmeer), also known as Wanderer above the Mist or Mountaineer in a Misty Landscape, [1] is an oil painting c. 1818 [2] by the German Romantic artist Caspar David Friedrich. It has been considered one of the masterpieces of Romanticism and one of its most representative works. It currently resides in the Kunsthalle Hamburg in Hamburg, Germany.
In the foreground, a young man stands upon a rocky precipice with his back to the viewer. He is wrapped in a dark green overcoat, and grips a walking stick in his right hand. [3] His hair caught in a wind, the wanderer gazes out on a landscape covered in a thick sea of fog. In the middle ground, several other ridges, perhaps not unlike the ones the wanderer himself stands upon, jut out from the mass. [4] Through the wreaths of fog, forests of trees can be perceived atop these escarpments. In the far distance, faded mountains rise in the left, gently leveling off into lowland plains in the right. Beyond here, the pervading fog stretches out indefinitely, eventually commingling with the horizon and becoming indistinguishable from the cloud-filled sky. [3]

Elizabeth Prettejohn argues that Friedrich’s Traveler exemplifies Kant’s idea of genius:
“Kant argued that genius involved making a work that was not limited to fulfilling its basic concept or intention, but that also expressed what he called aesthetic ideas . This bridged the gap between the making and the experience of the work of art, for the aesthetic ideas would suggest or stimulate a multitude of thoughts and reflections, thus encouraging the free play of imagination and understanding in the mind of the observer of the work. An artist might paint a mountain landscape that could be judged acceptable according to determinate criteria for illusionistic representation; such a work would realize the artist’s intention to paint a landscape of a certain kind. But Friedrich’s Wanderer above the Sea of Fog goes above and beyond merely realizing its intention. It is a work of genius in Kant’s sense, for it stimulated the observer’s mind to range freely over the widest variety of further musings – about pictorial space, human perceptions of space, or natural space, for example; about the relationship of human beings to nature, the spiritual dimensions of a sublime experience, or the presence of the divine in nature; about the unseen facial expression of the figure, his possible alienation from society, or his intellectual mastery of the scene before him (and us). Kant has often been accused of being a ‘formalist’, of concentrating on the formal features of objects to the neglect of their sociopolitical contexts. But there is no hint, in his discussion of aesthetic ideas, that we ought to limit our musings, in the contemplation of a work of art, to formal considerations. In response to the Friedrich, we may wish to think about a variety of non-aesthetic issues. Any of these trains of thought would be compatible with the free play of mind so long as they did not stop short at a cut-and-dried conclusion. More importantly, when taken together they demonstrate the inexhausitbility of the thoughts and feelings to which the picture may give rise. Thus they exemplify the aesthetic ideas which, for Kant, distinguished the work of genius: ‘I mean that representation of the imagination which induces much thought, yet without the possibility of any definite though whatever, i.e. concept , being adequate to it’.”

I. ENTERING THE WOOD
A path leads into the wood before me (figurer). I trace it with my eyes: a white painted surface which rises vertically from the bottom of the canvas, but which, as I cling to it with my gaze, stretches forth as a horizontal path. I see into the canvas as if into a wood; my eye goes forth into the distance as a stone would fall to earth.! Entering the wood, my eye can trace many paths. Straight ahead, the wall of bare tree trunks dissolves into shadow. The wood I have entered appears now like woodwork, or better, mock woodwork, like the false marble of a trompe-l’oeil. When the forest thus flattens into the canvas’ surface, depth and the illusion of space vanishes. If I raise my eyes higher, however, above the trees, my gaze soars into the distance. The sky, that little patch of blue, invokes a vast space beyond the painting’s narrow horizons. Lowering my gaze now, I can enter the wood under the sky. The road turns to the right and my eyes follow it, gliding over the fir trees which hide its progress. In my mind, I can see the road’s continued course, yet it is a phantom path beyond what the painted image offers. To follow this path is to trust a ‘blind path’, blind to the experience of the painting. Yet it is precisely at this turn into blindness that friedrich’s Early Snow (Frithschnee) situates us. We know of such roads in real forests, roads which seem to lead somewhere, but which end in the unnavigable. Such paths are paradoxical, since their existence means that someone was already there, yet their abrupt endings make us wonder where their creators have gone. We finally wonder whether they are paths at all. Like Heidegger’s Holzwege, they bring us to the threshold of something never seen before. To pursue such paths is to enter the new, although a new with strange origins in the past.

Call it the essence of the Romantic impulse it you like. Man, the eternal wanderer, stands alone in a landscape that he may even be calling into being.
He seems, with his cane and his frock coat, to be two things at once: the embodiment of the sheer imperiousness of man, commander and supreme explicator of the universe – see at what a great and commanding height he stands – who may be orchestrating this scene with his cane as if he were the conductor of Mahler’s Seventh, and also to be utterly vulnerable in the teeth of the overwhelming muchness of the forces of nature. He is both god-like in his stance, and hopelessly overshadowed, vertiginous in his fragility and aloneness. Notice the unruliness of the hair on the top of his head. That is the only outward hint that there is wildness within. 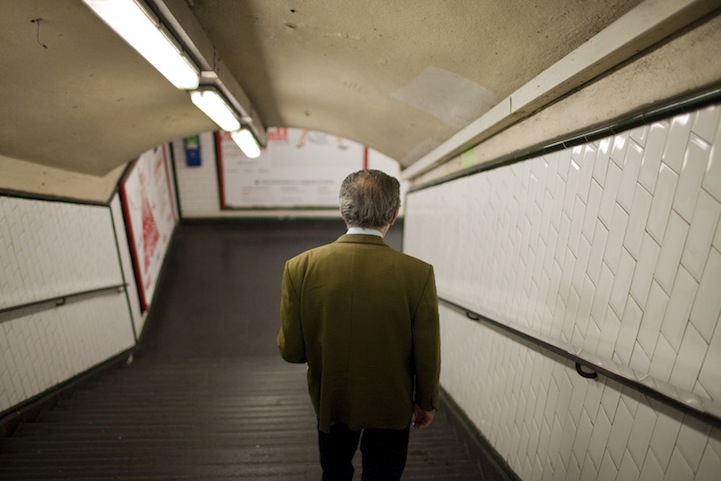 “This implies to us as a viewer that there is perhaps more to the landscape than we see. One can also identify with the figure. His posture invites you to imagine what he feels facing this landscape in front of his and your eyes.”

Damien Rayuela wants us to use our imaginations when viewing his series Halted Traveler. We only see the back of his subjects as they face an interesting landscape and we are left with a looming curiosity of not only what they are specifically looking at, but also what they are feeling at that particular moment.