An Analysis on Vincent van Gogh’s Starry Night
The first thing that I noticed was the overwhelming night sky, which takes up most of the background. Its swirling, flowing lines appear to be swishing across the background in this gentle, wavy motion and seem to be merging at the centre to form this spiral-like formation. Eleven fiery yellow stars that look like huge fireballs illuminate this whole piece and contrast with the cool blue, fluid night sky that takes on an amazing variety of shades of blue and grey. There is also the crescent moon at the top right hand corner that radiates a more orange, brighter light from the rest of the stars. The view of the night sky and village is partially blocked by this huge cypress bush in the foreground. It has this writhing quality to it and its black green colouring stands out to the rest of the relatively pastel piece. The houses are tiny and inconspicuously painted in the bottom right corner of the painting and blend in quite well with the forest and mountains. The architecture of the village is quaint and simple and no light illuminates the village, giving the impression that everyone there is probably asleep. In general, his brush strokes are heavy and thick and have this insistent, hectic rhythm to it. As a result, this painting has an illusion of constantly being in motion.

An end-of-the-world cataclysm invades Van Gogh’s Starry Night, one of apocalypse filled with melting aerolites and comets adrift. One has the impression that the artist has expelled his inner conflict onto a canvas. Everything here is brewed in a huge cosmic fusion. The sole exception is the village in the foreground with its architectural elements. Several months after painting Starry Night, Van Gogh wrote: “Why, I say to myself, should the spots of light in the firmament be less accessible to us than the black spots on the map of France. Just as we take the train to go to Tarascon or Rouen, we take death to go to a star.”
6) In his 2015 book, “Cosmographics,” Michael Benson contends that the inspiration behind the distinctive swirls in the sky of Van Gogh’s “Starry Night” is an 1845 drawing by astronomer William Parsons, Earl of Rosse, of the Whirlpool Galaxy.

In 1886, van Gogh moved to Paris, where he encountered the works of the Impressionists and Neo-Impressionists, and the Pointillist compositions of Georges Seurat. Inspired by these artistsвЂ™ harmonious matching of colors, shorter brushstrokes, and liberal use of paint, he brightened his own palette and loosened his brushwork, emphasizing the physical application of paint on the canvas. The style he developed in Paris and carried through to the end of his life became known as Post-Impressionism, a term encompassing works made by artists unified by their interest in expressing their emotional and psychological responses to the world through bold colors and expressive, often symbolic images. In a letter to his sister Willemien, touching upon the mind and temperament of artists, van Gogh once wrote that he was вЂњvery sensitive to color and its particular language, its effects of complementaries, contrasts, harmony.вЂќ 2
A Modern and Contemporary art study set for test-takers, teachers, and lifelong learners alike. 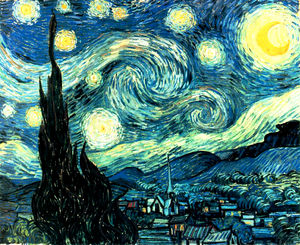 The artist was aware that his Starry Night composition was somewhat surreal and stylized and in a letter to his brother he even referred to “exaggerations in terms of composition. “ The vivid style chosen by van Gogh was unusual – he chose lines to portray this night scene when silhouettes would have been a more obvious choice.
Van Gogh´s choice of color in Starry Night has been much debated, particularly the dominance of yellow in this and other late works. Some believe van Gogh may have been suffering from lead poisoning or a type of brain disease and that this explains his strange use of color in later paintings.