what did donatello’s use of expression add to his sculptures

Niccolo da Uzzano was an important figure in Florentine politics in the early decades of the 15th century, who acted as a respected intermediary figure between the city’s powerful rival families. Donatello produced the bust (although its authorship is sometimes contested) soon after Uzzano’s death in 1433. It was the first half-bust of a private citizen produced since antiquity.
Donatello was commissioned by the swordmakers’ and armorers’ guild to carve this sculpture of their patron saint, St. George, for a niche on the exterior of the church of Orsanmichele in Florence. The work is a life-sized depiction of the saint standing atop a marble panel which is carved to illustrate the famous mythical moment when George slayed the dragon. Although the work was meant to reflect the Florentine spirit of holding strong against all adversaries, Donatello’s meticulous rendering of the emotionality of the face also betrays a distinct vulnerability and softness. This expertise in portraying emotion, as is also seen in his equestrian statue of condottiero Erasmo da Narni, was a signature technique of the artist toward humanizing subjects that would traditionally be presented in a more idealized fashion. 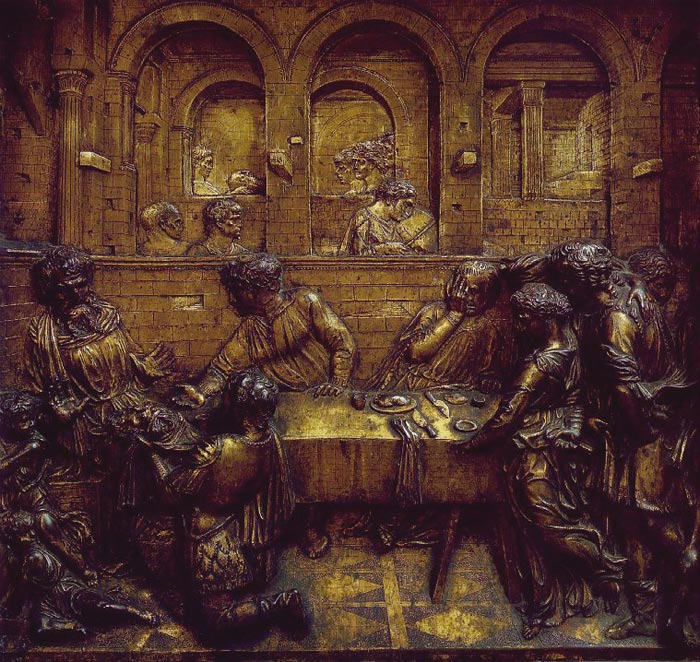 In the early 1450s, Donatello undertook some important works for the Paduan Church of San Antonio: a splendidly expressive bronze crucifix and a new high altar, the most ambitious of its kind, unequaled in 15th-century Europe. Its richly decorated architectural framework of marble and limestone contains seven life-size bronze statues, 21 bronze reliefs of various sizes, and a large limestone relief, Entombment of Christ. The housing was destroyed a century later, and the present arrangement, dating from 1895, is wrong both aesthetically and historically. The majestic Madonna, with an austere frontal pose seemingly a conscious reference to an earlier venerated image, and the delicate, sensitive St Francis are particularly noteworthy. The finest of the reliefs are the four miracles of St Anthony, wonderfully rhythmic compositions of great narrative power. Donatello’s mastery in handling large numbers of figures (one relief has more than 100) anticipates the compositional principles of the High Renaissance.
The National Bargello Museum | The National Bargello Museum is housed in the former Palace of the Capitain of the People. According to Vasari, the original core, dating to 1255, was built following a design by a certain Lapo, father of Arnolfo di Cambio, and corresponds to the site overlooking Via del Proconsolo: this was the city’s oldest seat of government.
From the late 13th century until 1502 the Palace was the official residence of the Podestà, the magistrate who governed the city and who, by tradition, had to come from another town. Around 1287 the balcony was built, a beautiful loggia overlooking the courtyard where the Podestà often held meetings with the representatives of the guilds and corporations. The tower, which predates the rest of the building, held a bell known as La Montanina, which rang to call the Florentine citizens to gather in case of war or siege.
In 1502 the palace became the headquarters of the Council of Justice and of the Police, whose head was known as the Bargello. In 1786, when the grand duke Pietro Leopoldo abolished the death penalty, the torture instruments were burnt in the courtyard. The prisons remained in use until 1857, when they were transferred to the former Murate convent; the palace underwent complete restoration after this date under the guidance of the architect, Francesco Mazzei.
The Bargello became a sculpture museum in 1886, the year in which the fifth centenary of Donatello’s birth was celebrated. Two years later, the museum received a generous gift of Gothic and Renaissance artifacts from the French antiquarian, Louis Carrand, followed, in 1894, by a donation made by Costantino Ressman, ambassador and collector of weapons. In 1907, Giulio Franchetti donated his collection of fabrics with examples dating from the 6th to 18th centuries.
On display in the Michelangelo Room are works by that great Renaissance artist: the so-called Drunken Bacchus, sculpted in Rome between 1497 and 1499; the marble tondo with the Madonna and Child with St John, carried out in 1504 for Bartolomeo Pitti; the David-Apollo, marble statue, begun in 1531; the Brutus, marble bust carried out around 1540; as well as the Bacchus, marble statue, sculpted by Jacopo Sansovino around 1520, the bronze bust of Cosimo I by Benvenuto Cellini; also on display another outstanding example of 16th-century sculpture, Giambologna’s splendid Mercury, a bronze from 1564. On display in the cabinet are a number of beautiful bronze animals made by the same artist around 1567 for the Medici villa in Castello.