what does the painting by caravaggio the calling of st. matthew mean

In keeping with his plain, unvarnished aesthetics, Caravaggio borrows from his earlier genre painting (The Cardsharps, The Fortune-Teller), and sets the scene in what appears to be a tavern, rather than a counting house or office. He may have modelled it on earlier examples of Northern Renaissance art – by Hans Holbein and others – featuring money lenders seated around a table. In addition, he introduces some very human interplay into the situation. To begin with, when he sees Christ pointing at him, Levi responds with a gesture, as if to say “Me?” indicating his uncertainty whether he is being addressed, or the younger man slumped on his right. In addition, the ray of light illuminating their faces, draws attention to the two youths, who appear rather lost in this group of older men. While one of them draws back in apprehension and looks to his older neighbour for protection, the other has turned to confront Christ, causing Saint Peter to gesture firmly for calm. Through the visual contrast between their reactions, Caravaggio displays psychological insight into two possible patterns of human behaviour in the same situation.
The Calling of Saint Matthew illustrates the passage in the Gospel of Matthew (Matthew 9:9), when Jesus went into the custom house, saw Matthew at his seat and called to him, “Follow me”. According to the story Matthew rose and followed him. In the painting, Christ (on the right, behind Peter) points to Levi, the tax-collector (the bearded man wearing a beret, who also appears in the two other Matthew paintings in the chapel) – and calls upon him to become the apostle Matthew. Although Levi is well to the left of the picture, the viewer’s attention is nevertheless drawn to him by the hands pointing at him as well as by the intensity of the light shining on him.

In some ways, most of the plebeian, nearly life-sized inhabitants of Levi’s money table are the equivalent, if not modeled by those persons in other Caravaggio paintings, including Caravaggio’s famous secular genre paintings of The Cardsharps (1595).
A more recent interpretation proposes that the bearded man is in fact pointing at the young man at the end of the table, whose head is slumped. In this reading, the bearded man is asking “Him?” in response to Christ’s summons, and the painting is depicting the moment immediately before a young Matthew raises his head to see Christ. Other writers describe the painting as deliberately ambiguous. [1]

The picture is divided into two parts. The standing figures on the right form a vertical rectangle; those gathered around the table on the left a horizontal block. The costumes reinforce the contrast. Levi and his subordinates, who are involved in affairs of this world, are dressed in a contemporary mode, while the barefoot Christ and Saint Peter, who summon Levi to another life and world, appear in timeless cloaks. The two groups are also separated by a void, bridged literally and symbolically by Christ’s hand. This hand, like Adam’s in Michelangelo’s Creation of Adam, unifies the two parts formally and psychologically. Underlying the shallow stage-like space of the picture is a grid pattern of verticals and horizontals, which knit it together structurally.
Caravaggio represented the event as a nearly silent, dramatic narrative. The sequence of actions before and after this moment can be easily and convincingly re-created. The tax-gatherer Levi (Saint Matthew’s name before he became the apostle) was seated at a table with his four assistants, counting the day’s proceeds, the group lighted from a source at the upper right of the painting. Christ, His eyes veiled, with His halo the only hint of divinity, enters with Saint Peter. A gesture of His right hand, all the more powerful and compelling because of its languor, summons Levi. Surprised by the intrusion and perhaps dazzled by the sudden light from the just-opened door, Levi draws back and gestures toward himself with his left hand as if to say, “Who, me?”, his right hand remaining on the coin he had been counting before Christ’s entrance. 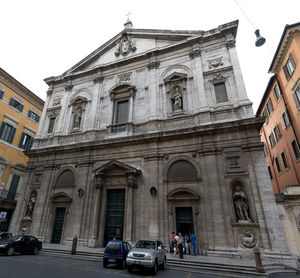 The figures are engulfed by shadow and it is only the beaming light that shines across the wall and highlights the fact of St Matthew and the seated group that brightens the canvas.
Use of light:
The artist’s use of light and shadow adds drama to this image as well as giving the figures a quality of immediacy. Many other artists later followed Caravaggio’s example and copied this technique.

But I have always favored the other theory: St. Matthew is the young man at the end of the table. Head bowed, shoulders hunched under the weight of his misdeeds and the troubles of his wayward life. Preoccupied, his fingers absently fumble with his ill-gotten coins. He is aware of the man at the door. And he is aware of the call. But his shame, his fear, his sense of utter unworthiness overwhelms him. Does salvation rest with this Rabbi at the door? Or is it found in the coins in my hands and the friends at my table? Can I shake my past, my irredeemable past and walk a different way? Perhaps, just perhaps with his help, I can be pulled from this blackness into a radiant light.
The light penetrating the painting travels from right to left. It emerges from just above Jesus and yet seems a potent extension of him. The words of Christ, as of yet unspoken, are embodied in this image, “I am the light of the world. Whoever follows me will not walk in darkness, but will have the light of life.” (John 8:12) The tax collectors and their table with its coins, quills and ledgers find themselves bathed in the light. While it illuminates their grime, their dirt, their sins… the light offers to cleanse them as well.