The two central sculptural figures of the swooning nun and the angel with the spear derive from an episode described by Teresa of Avila, a mystical cloistered Discalced Carmelite reformer and nun, in her autobiography, The Life of Teresa of Jesus (1515–1582). Her experience of religious ecstasy in her encounter with the angel is described as follows: 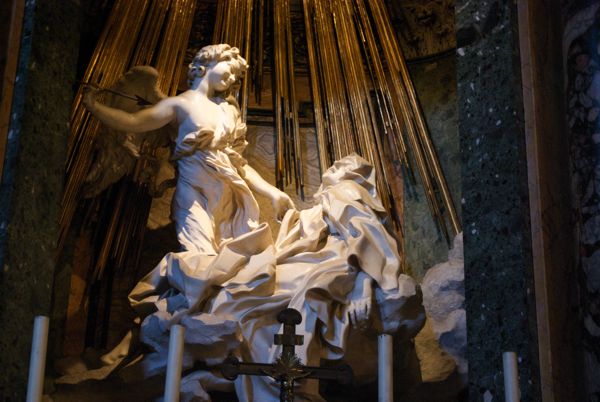 Although controversial, Teresa’s ecstatic response to the piercing love of God is very naturalistic. Bernini is said to have captured many different passions and emotions in this single piece, including pain and pleasure (Martin 104). He no doubt brings to the real world a very limitless and spiritual world. This threshold, along with the concepts of light, naturalism, and dynamism make this sculpture truly representative of the Baroque period.
Ecstasy of St. Teresa 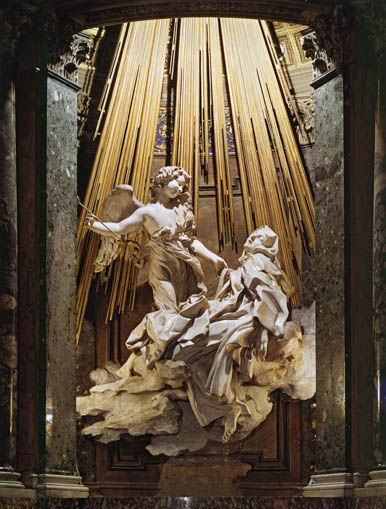 Gian Lorenzo Bernini created The Ecstasy of Saint Teresa (L’Estasi di Santa Teresa) in 1645-1652 using marble, stucco, and gilt bronze. The work was commissioned by the Cornaro family, and resides in Rome in the Cornaro Chapel of the Santa Maria della Vittoria. The sculpture itself is situated above the church altar, positioned so the bronze beams illuminate the marble figures.
The Ecstasy of Saint Teresa is a subtraction sculpture in the round of the Baroque period. Despite this, it is mounted against a wall, preventing the viewer from getting a full, all-around view of the work. The sculpture is dense, yet smooth and intricately detailed, giving the impression of dramatic, flowing fabric.The piece is a depiction of an episode from St. Teresa’s life according to her autobiography, in which she describes having a vision of an angel coming down and stabbing her repeatedly through the heart with an arrow. Her experience was that of spiritual rapture, yet also described in a somewhat sexual nature. Bernini’s sculpture features St. Teresa reclining on a bed of clouds, with a smaller, cupid-like angel hovering over her, delicately holding a golden arrow between his fingertips, aimed at St. Teresa’s heart. The angel smiles looking at St. Teresa’s face, whose features are characterized by closed eyes and parted lips. Most of her body is hidden beneath draped fabric, but her limbs and hands hang limp as she is wholly caught up in the ecstasy of the moment. The sculpture itself measures in at a height of 3.5 meters, but the golden rods reach down towards the figures, extending the scene and giving the work added depth and height. The rods highlight the fiery rapture experienced by St. Teresa, as if coming straight down from the heavens, from God himself. The focal point of the piece is the interaction between the angel and St. Teresa, seen in the invisible line reaching from the angel’s gaze to St. Teresa’s face, displaying the intensely emotional and spiritual nature of the piece.