why fragonard refused to paint the swing

Click on the detail to see the full image.
Jean- Honoré Fragonard’s The Swing was essentially a commission passed to him by another painter Gabriel-François Doyen. The painting’s storyline and composition was proposed to Doyen by a gentleman of the court, who wanted a painting of him and his mistress. The exact identity of the patron is unknown, though he was at one time thought to have been the Baron de Saint-Julien, the Receiver General of the French Clergy, which would have explained the request to include a bishop pushing the swing. Gabriel Doyen refused the commission and instead passed it on to Fragonard who removed any references to specific people but kept the concept of the original proposal. In the 18 th century, bathing scenes were often a pretext to show the nude in a variety of positions and from a range of angles, showcasing the painter’s skill whilst also providing the viewer with a visual pleasure that verged toward the titillating. The painting showcases Fragonard’s lightness in both theme and palette; the colors, in their gentleness, are suited toward their subject, imbuing the women with an innocence that heightens their appeal. The brushstrokes are loose and palpable, providing a sensuousness, physicality, and fluidity that contributes to the painting’s liveliness. Fragonard stopped exhibiting his paintings in 1767, preferring to focus on work for private clients, and this is among the last to be displayed in an academic setting.
Oil on canvas – Collection of MusГ©e du Louvre, Paris, France

For some more power-play inspired by The Swing you could consider Yinka Shonibare’s installation (2001). The British-Nigerian artist positions a dark-skinned mannequin clothed in the Dutch wax print playing the role of lady on the swing. A Daily Art article about this piece will soon be available.
Fragonard painted over 550 paintings in the Rococo style. But what is Rococo? 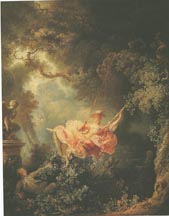 Fragonard’s The Happy Accidents of the Swing, 1767
Augustus of Primaporta, late 1st century BC or early 1st century A.D.